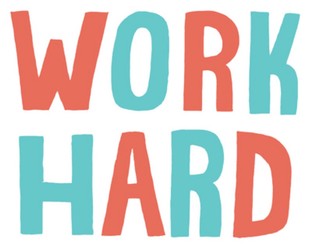 Wage labour (also wage labor in American English) is the socioeconomic relationship between a worker and an employer, where the worker sells his or her labour power under a formal or informal employment contract. These transactions usually occur in a labour market where wages are market determined.

In exchange for the wages paid, the work product generally becomes the undifferentiated property of the employer, except for special cases such as the vesting of intellectual property patents in the United States where patent rights are usually vested in the employee personally responsible for the invention.

A wage labourer is a person whose primary means of income is from the selling of his or her labour power in this way. 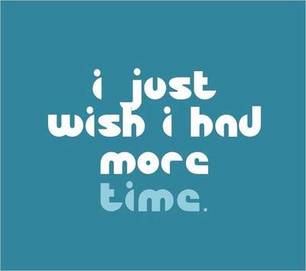 In modern mixed economies such as those of the OECD countries, it is currently the most common form of work arrangement. Although most labour is organised as per this structure, the wage work arrangements of CEOs, professional employees, and professional contract workers are sometimes conflated with class assignments, so that "wage labour" is considered to apply only to unskilled, semi-skilled or manual labour.

Various studies have shown that employees generally spend 1.5 to 3 hours a day on non-work related activities.

The most common form of wage labour currently is ordinary direct, or "full-time". This is employment in which a free worker sells his or her labour for an indeterminate time (from a few years to the entire career of the worker), in return for a money-wage or salary and a continuing relationship with the employer which it does not in general offer contractors or other irregular staff.

However, wage labour takes many other forms, and explicit as opposed to implicit (i.e. conditioned by local labour and tax law) contracts are not uncommon. Economic history shows a great variety of ways, in which labour is traded and exchanged. 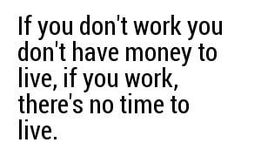 Wage labour has long been compared to slavery. As a result, the term "wage slavery" is often utilised as a pejorative for wage labour. Similarly, advocates of slavery looked upon the "comparative evils of Slave Society and of Free Society, of slavery to human Masters and slavery to Capital,"and proceeded to argue persuasively that wage slavery was actually worse than chattel slavery.

Slavery apologists like George Fitzhugh contended that workers only accepted wage labour with the passage of time, as they became "familiarized and inattentive to the infected social atmosphere they continually inhale[d].

According to Noam Chomsky, analysis of the psychological implications of wage slavery goes back to the Enlightenment era. In his 1791 book On the Limits of State Action, classical liberal thinker Wilhelm von Humboldt explained how "whatever does not spring from a man's free choice, or is only the result of instruction and guidance, does not enter into his very nature; he does not perform it with truly human energies, but merely with mechanical exactness" and so when the labourer works under external control, "we may admire what he does, but we despise what he is".

Both the Milgram and Stanford experiments have been found useful in the psychological study of wage-based workplace relations. Additionally, as per anthropologist David Graeber, the earliest wage labour contracts we know about were in fact contracts for the rental of chattel slaves (usually the owner would receive a share of the money, and the slave, another, with which to maintain his or her living expenses.) Such arrangements, according to Graeber, were quite common in New World slavery as well, whether in the United States or Brazil. C. L. R. James argued in The Black Jacobins that most of the techniques of human organisation employed on factory workers during the industrial revolution were first developed on slave plantations.

For Marxists, labour-as-commodity, which is how they regard wage labour, provides a fundamental point of attack against capitalism. "It can be persuasively argued," noted one concerned philosopher, "that the conception of the worker's labour as a commodity confirms Marx's stigmatisation of the wage system of private capitalism as 'wage-slavery;' that is, as an instrument of the capitalist's for reducing the worker's condition to that of a slave, if not below it." That this objection is fundamental follows immediately from Marx's conclusion that wage labour is the very foundation of capitalism: "Without a class dependent on wages, the moment individuals confront each other as free persons, there can be no production of surplus value; without the production of surplus-value there can be no capitalist production, and hence no capital and no capitalist!" - Source
Wage slavery 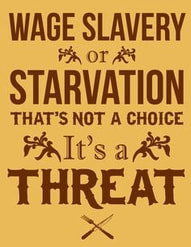 Wage slavery is a term used to draw an analogy between slavery and wage labor by focusing on similarities between owning and renting a person. It is usually used to refer to a situation where a person's livelihood depends on wages or a salary, especially when the dependence is total and immediate.

The term "wage slavery" has been used to criticize exploitation of labour and social stratification, with the former seen primarily as unequal bargaining power between labor and capital (particularly when workers are paid comparatively low wages, e.g. in sweatshops) and the latter as a lack of workers' self-management, fulfilling job choices and leisure in an economy.

The criticism of social stratification covers a wider range of employment choices bound by the pressures of a hierarchical society to perform otherwise unfulfilling work that deprives humans of their "species character" not only under threat of starvation or poverty, but also of social stigma and status diminution. 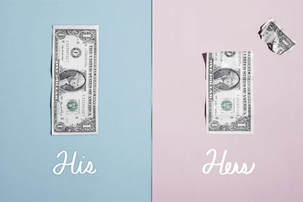 Similarities between wage labor and slavery were noted as early as Cicero in Ancient Rome. With the advent of the industrial revolution, thinkers such as Pierre-Joseph Proudhon and Karl Marx elaborated the comparison between wage labor and slavery, while Luddites emphasized the dehumanization brought about by machines. Before the American Civil War, Southern defenders of African American slavery invoked the concept of wage slavery to favorably compare the condition of their slaves to workers in the North.

The United States abolished slavery after the Civil War, but labor union activists found the metaphor useful. According to Lawrence Glickman, in the Gilded Age "[r]eferences abounded in the labor press, and it is hard to find a speech by a labor leader without the phrase".

The introduction of wage labor in 18th century Britain was met with resistance, giving rise to the principles of syndicalism. Historically, some labor organizations and individual social activists have espoused workers' self-management or worker cooperatives as possible alternatives to wage labor.
Similarities of wage work with slavery
Critics of wage work have drawn several similarities between wage work and slavery: