Most EU institutions were created with the establishment of the European Coal and Steel Community (ECSC) in the 1950s. Much change since then has been in the context the shifting of the power balance away from the Council and towards the Parliament. The role of the Commission has often been to mediate between the two or tip the balance.

However the Commission is becoming more accountable to the Parliament: in 1999 it forced the resignation of the Santer Commission and forced a reshuffle of the proposed Barroso Commission in 2004. The development of the institutions, with incremental changes from treaties and agreements, is testament to the evolution of the Union's structures without one clear "master plan". 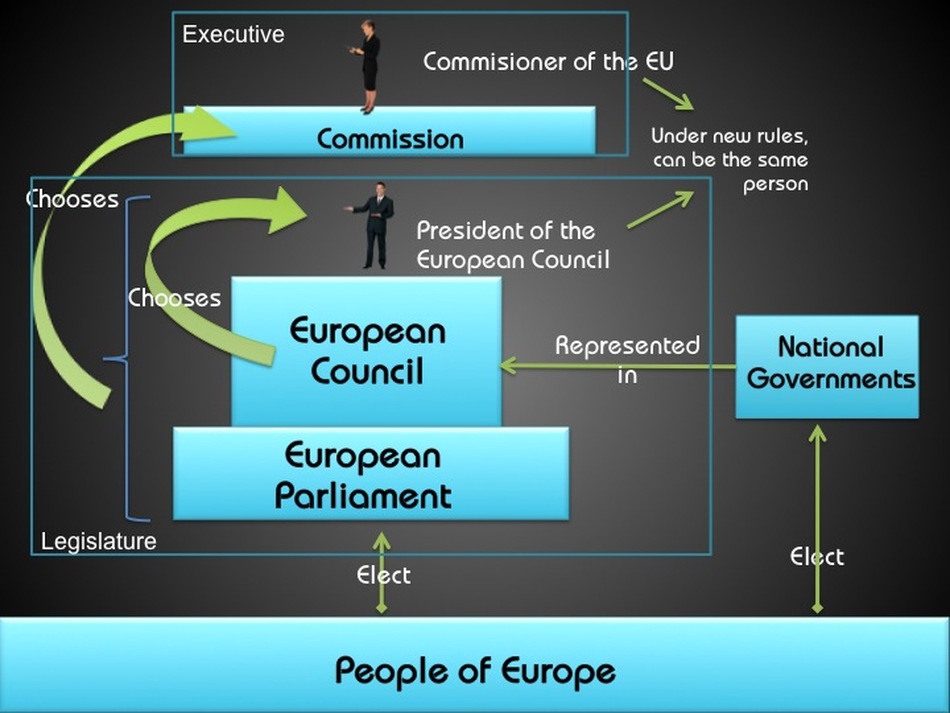 The first institutions were created at the start of the 1950s with the creation of the ECSC, based on the Schuman declaration, between six states. The ECSC was designed to bring the markets of coal and steel, the materials needed to wage war, under the control of a supranational authority with the aim of encouraging peace and economic development. It established the first institutions. At its core was an independent executive called the "High Authority" with supranational powers over the Community. The laws made by the Authority would be observed by a Court of Justice in order to ensure they were upheld and to arbitrate.

During the negotiations, two supervisory institutions were put forward to counterbalance the power of the High Authority. The "Common Assembly" proposed by Jean Monnet to act as a monitor, counterweight and to add democratic legitimacy was composed of 78 national parliamentarians. The second was the Council of Ministers, pushed by the smaller states also to add an intergovernmental element and harmonise national polices with those of the authority.

In 1957 the Treaties of Rome established two, similar, communities creating a common market (European Economic Community) and promoting atomic energy co-operation (Euratom). The three institutions shared the Court of Justice and the Parliament, however they had a separate Council and High Authority, which was called the Commission in these Communities. The reason for this is the different relationship between the Commission and Council. At the time the French government was suspicious of the supranationalism and wanted to limit the powers of the High Authority in the new Communities, giving the Council a greater role in checking the executive.

The three communities were later merged in 1967, by the Merger Treaty, into the European Communities. The institutions were carried over from the European Economic Community (making the Commission of that community the direct ancestor of the current Commission). Under the Treaties of Rome, the Common Assembly (which renamed itself the Parliamentary Assembly, and then the European Parliament) was supposed to become elected. However this was delayed by the Council until 1979. Since then it gained more powers via successive treaties. The Maastricht Treaty also gave further powers to the Council by giving it a key role in the two new pillars of the EU which were based on intergovernmental principles. 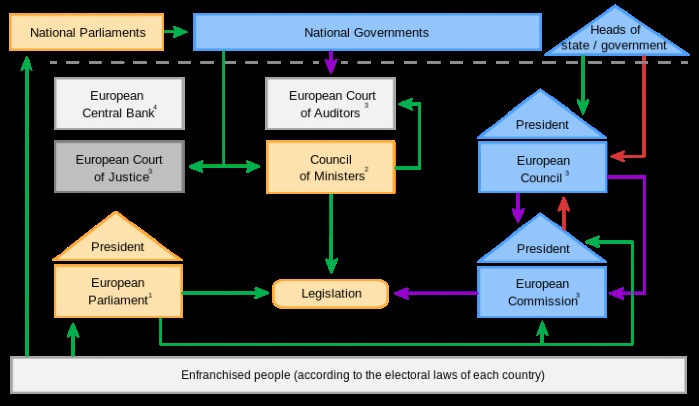 File
The 2009 Lisbon Treaty brought nearly all policy areas (including the budget) under the codecision procedure (renamed "ordinary legislative procedure"), hence increasing the power of the Parliament. The rules for the distribution of seats in the parliament were also changed to a formula system. The High Representative merged with the European Commissioner for External Relations and joined the Commission. The appointment of the Commission President became dependent upon the last EU elections. The Council of Ministers adopted more qualified majority voting and the European Council was made a distinct institution with a permanent president. The Court of Justice had some minor renaming and adjustments. In addition, the central bank became a full institution.

Political institutions There are three political institutions which hold the executive and legislative power of the Union. The Council represents governments, the Parliament represents citizens and the Commission represents the European interest. Essentially, the Council, Parliament or another party place a request for legislation to the Commission. The Commission then drafts this and presents it to the Parliament and Council, where in most cases both must give their assent. Although the exact nature of this depends upon the legislative procedure in use, once it is approved and signed by both bodies it becomes law. The Commission's duty is to ensure it is implemented by dealing with the day-to-day running of the Union and taking others to Court if they fail to comply.

There are two core functional treaties that lay out how the EU operates and a number of satellite treaties which are interconnected with them. The treaties have been repeatedly amended by other treaties over the 60 years since they first began. The modern amended versions are known as the "consolidated treaties". .... link