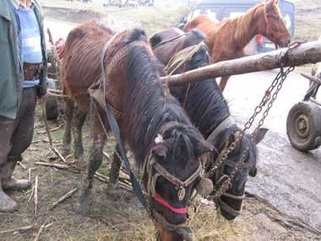 The horses and donkeys often live under harsh conditions with little food and many hours of work.

Many horse- and donkey-owners are driving their animals too hard and do not understand, or do not care, why the animals can not manage what they are supposed to do. They also use simple traction devices which chafes and hurts the animals. 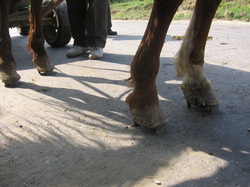 Many of the animals have large blisters, large open wounds and hooves and teeth are not taken care of by their owners.

The animals are often mistreated and beaten to make one last effort. When some owners get tired of their animals, they simply drop them somewhere to starve to death or just kill them. 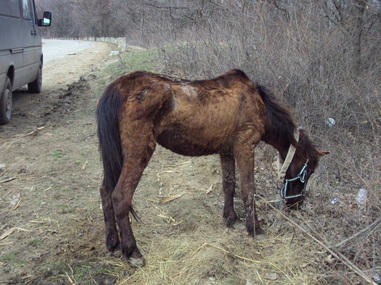 The ban applies for entry to the European Union 2008 - Ribs showing clearly through their tattered flanks, the starving horses corralled on the edge of the eastern Romanian city of Galati are just a few days away from death. Once, they would have pulled wooden carts along the city's streets or worked in the fields, as horses have done in Romania for centuries.

But now they have been abandoned by their owners, victims of a disastrous attempt to bring the country into line with European Union law by banning horse-drawn carts from main roads. Over the past month, hundreds of stray horses have been found roaming the streets and parks of Romania's major cities. Many are half-starved and barely able to walk; some have died where they were discovered, unable to get back to their feet.

Pitifully thin and bearing the scars of frequent beatings, the horses rounded up in Galati will be sent to the slaughterhouse within days unless someone comes forward to claim them, or to offer them new homes. But there is little demand for an ailing animal in a country where an estimated one million working horses have been officially labelled an anachronism. 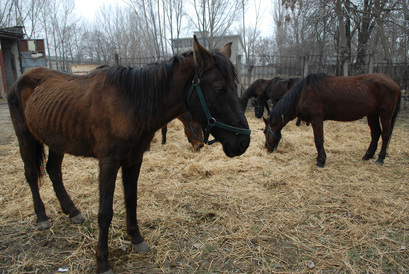 Some owners have decided it is cheaper to dump the animals than to keep them, since the cost of feeding a horse is now about £80 a month. Many people living in the countryside earn just £50 a month.

"They think that if it is no use to them any more they can just set it loose."

She said the authorities were struggling to cope with the scale of the problem and were turning to private groups for help.

"We had a call to say there was a sick horse next to the steel plant," she said. "We had to rent a truck to pick him up and we looked after him for four days, but his legs were injured and he could not get up off the ground. We had to watch him die."

Similar stories have emerged across Romania after police started to enforce laws banning carts from the roads in order to bring Romania into line with European road safety legislation. 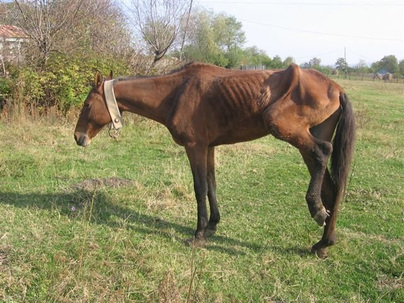 Romanian police, who say they were under pressure from the EU to cut accident figures, blame horse-drawn carts for 10 per cent of the country's 8,400 serious road accidents last year.

Chief Commissioner Carol Varna, head of the Romanian police traffic safety department, said that more than 1,000 carts had been seized since officers started to enforce the law.

"There are some owners who just let their horses go when they cannot afford them any more," he said.

In the past month, at least 15 horses have been found abandoned in the centre of the capital, Bucharest. 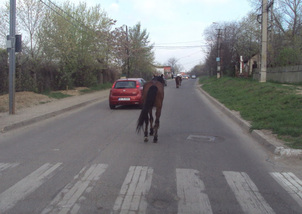 Elsewhere in the country, campaigners have been told of animals pushed into ditches and beaten to death with sticks. Television news reports showing abandoned horses dying in the snow prompted 200,000 people to sign a petition calling for a new government body to look after animals.

Calin Alexandru, a vet who is co-ordinating Bucharest's attempts to deal with the problem, said it was a struggle to find homes for the horses.

"We are seeing more and more abandoned," she said. "We cannot find their owners."

But horse owners, who face fines of up to £100 and the confiscation of both their cart and their animal if they are caught on main roads, believe that it is the end of a way of life. 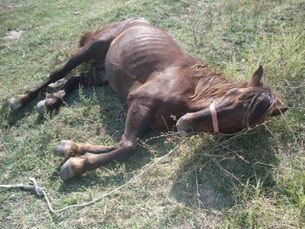 Vasile Adresana, 25, said he had no choice but to get rid of his horse when the police started cracking down on the roads around his home town of Roman, in the north-east of the country.

"I used to work gathering wood which I would sell, but the government introduced these laws under EU pressure. Everyone ignored them for a while, but when the police started enforcing the laws there were many roads that I was no longer allowed to travel on with my cart.

"There was not enough thought given to the consequences."

His wife Miheala, 23, said one of their neighbours had kept his horse, but only because he could no longer get rid of it legally. "The animal is all skin and bone and he beats it all the time - he can't use it for anything and he gets frustrated, but it's not the horse's fault."

John Ross, a British equestrian who arranges riding holidays in Transylvania, said that the police were too quick to blame animals for the high accident statistics.

"The ban was slipped in stealthily," he said. "There are some villages where farmers cannot legally get to their fields any more."

It's not just stray dogs that are used as money-maker in Romania, there are also horses that people trying to sell to other countries. Many of the horses are sick and have contagious diseases. These problems apply not only Romania, but also to other countries in Europe, where segregation is high and poor residents trying to survive the day.

But the atrocities continue - It is all too common fate of Romanian horses and donkeys - if they do not manage anymore -  first almost beaten to death - then left to die - alone and in agony. 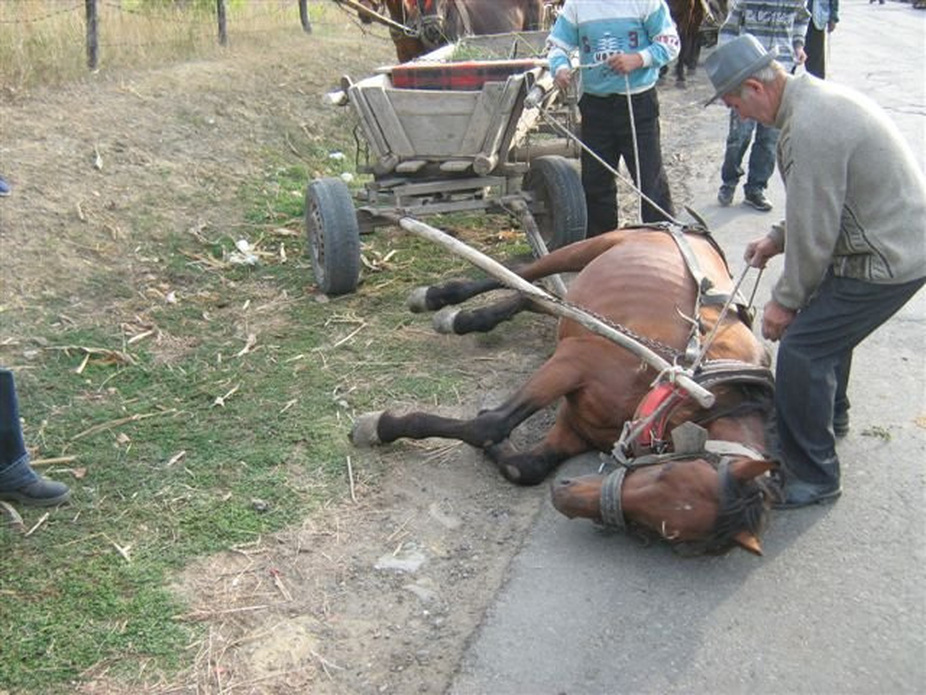 Animals who can not pull more, being abandoned at the roadside - beaten to death or left badly injured and shocked - alone.

Romanian journalists and reporters are busy reporting on all the horrific events in the country - when will Romania sort out the animal protection laws and start to punish animal tormentors?

Dead or dying draft animals is a common sight in Romania - when the animal can not do his duty, killing the owner the animal as punishment and get a new "working tool" .....
One of many Facebook message from concerned citizens: 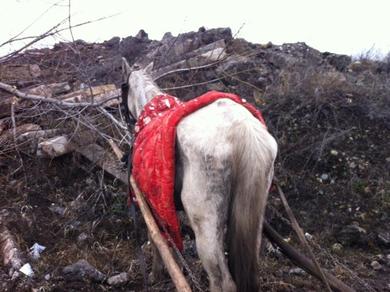 (January 11, 2013) - This is the horse that I have seen almost 2 weeks ago, starved, full of wounds that fells down because she is starved and beaten. Since then, I was negotiating with the *gypsy that owns her to give it to me and I also looked for transport and food for her. I will need to raise at least 250 E to transport her, buy food, veterinary treatment and pay the *gypsy.

The wounds can't be seen in the pictures as the *gypsy refused to take the blanket from her, but I will try to take pictures with her wounds soon.

Also the people that know the *gypsy and the horse told me that yesterday, she fell 3 times and there are days that she doesn't eat anything or she eats 2 breads in the evening when some neighbors give to her, still she is forced to pull the cart with 2 tons of steel.
ESDAW *disassociate ourselves to single out ethnic groups, since this has to do with the animal protection laws of the country and not ethnic groups.
Pictures of the horse after the rescue operation.

HORSE beaten and left to die on the street - ROMANIA 2012!

Romanian draft animals are just tools - to be torn out and replaced.
Some movies can perceived as offensive
Homeless and abandoned horses, donkeys, dogs and cats ............

To beat horses and donkeys in Romania is more the rule than the exception.

This donkey was rescued.

The movie is graphic - Little Grey

Animal Friends in Romania will do anything to help - but it is an uneven struggle - The horses are abandoned, homeless, tied in forests without water or food. It's not the horses' fault that they were born in a country like Romania, no love and care only hunger and anguish. Merita is given a second chance, a chance that vet Mrs. Ilinca Cioculescu gave her by creating a shelter and keep them off the streets and forests - more dead than alive. The shelter called the Star of Hope, they need our help in order to live, to recover, to learn the feeling of being loved.