In general terms, Asia is bounded on the east by the Pacific Ocean, on the south by the Indian Ocean and on the north by the Arctic Ocean. The western boundary with Europe is a historical and cultural construct, as there is no clear physical and geographical separation between them. The most commonly accepted boundaries place Asia to the east of the Suez Canal, the Ural River, and the Ural Mountains, and south of the Caucasus Mountains and the Caspian and Black Seas.

China and India alternated in being the largest economies in the world from 1 to 1800 A.D. China was a major economic power and attracted many to the east, and for many the legendary wealth and prosperity of the ancient culture of India personified Asia, attracting European commerce, exploration and colonialism. The accidental discovery of America by Columbus in search for India demonstrates this deep fascination. The Silk Road became the main East-West trading route in the Asian hitherland while the Straits of Malacca stood as a major sea route.

Asia has exhibited economic dynamism (particularly East Asia) as well as robust population growth during the 20th century, but overall population growth has since fallen. Asia was the birthplace of most of the world's mainstream religions including Christianity, Islam, Judaism, Hinduism, Buddhism, Confucianism, Taoism (or Daoism), Jainism, Sikhism, Zoroastranism, as well as many other religions.

Given its size and diversity, the concept of Asia—a name dating back to classical antiquity—may actually have more to do with human geography than physical geography. Asia varies greatly across and within its regions with regard to ethnic groups, cultures, environments, economics, historical ties and government systems. It also has a mix of many different climates ranging from the equatorial south via the hot desert in the Middle East, temperate areas in the east and the extremely continental centre to vast subarctic and polar areas in Siberia. 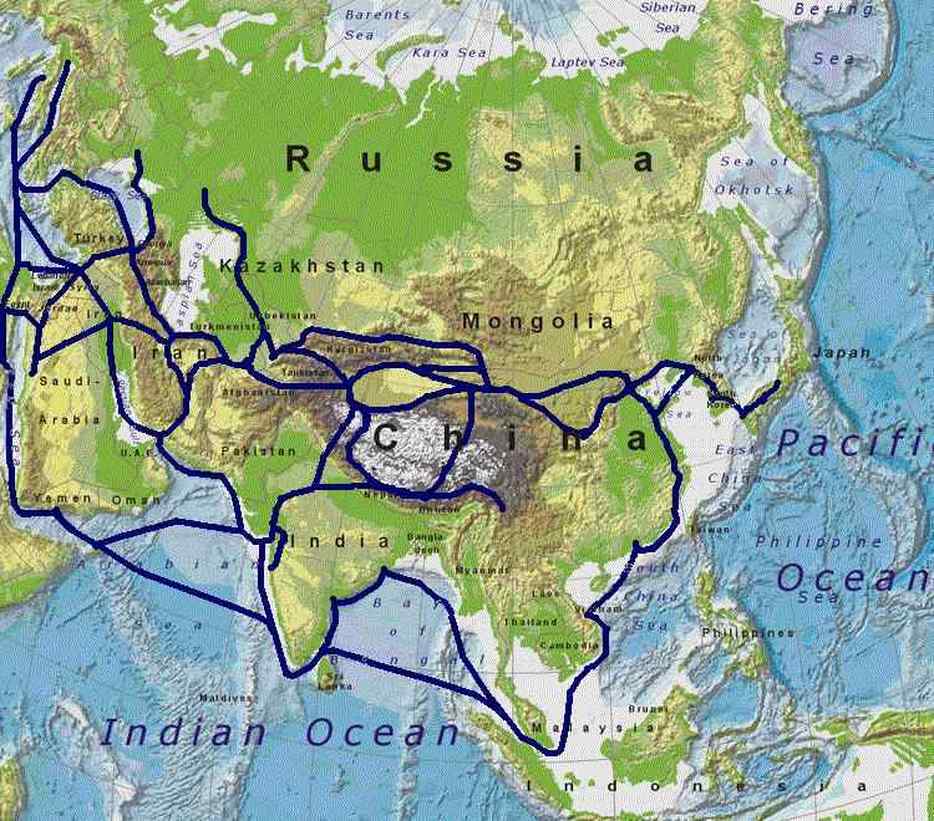 The Silk Road connected many civilizations across Asia.
Ongoing definition
Geographical Asia is a cultural artifact of European conceptions of the world, beginning with the Ancient Greeks, being imposed onto other cultures, an imprecise concept causing endemic contention about what it means. Asia is larger and more culturally diverse than Europe. It does not exactly correspond to the cultural borders of its various types of constituents.

From the time of Herodotus a minority of geographers have rejected the three-continent system (Europe, Africa, Asia) on the grounds that there is no substantial physical separation between them.For example, Sir Barry Cunliffe, the emeritus professor of European archeology at Oxford, argues that Europe has been geographically and culturally merely "the western excrescence of the continent of Asia".

Geographically, Asia is the major eastern constituent of the continent of Eurasia with Europe being a northwestern peninsula of the landmass. Asia, Europe and Africa make up a single continuous landmass - Afro-Eurasia (except for the Suez Canal) and share a common continental shelf. Almost all of Europe and the better part of Asia sit atop the Eurasian Plate, adjoined on the south by the Arabian and Indian Plate and with the easternmost part of Siberia (east of the Chersky Range) on the North American Plate.
History
The history of Asia can be seen as the distinct histories of several peripheral coastal regions: East Asia, South Asia, Southeast Asia and the Middle East, linked by the interior mass of the Central Asian steppes.
The coastal periphery was home to some of the world's earliest known civilizations, each of them developing around fertile river valleys. The civilizations in Mesopotamia, the Indus Valley and the Yellow River shared many similarities. These civilizations may well have exchanged technologies and ideas such as mathematics and the wheel. Other innovations, such as writing, seem to have been developed individually in each area. Cities, states and empires developed in these lowlands.
The central steppe region had long been inhabited by horse-mounted nomads who could reach all areas of Asia from the steppes. The earliest postulated expansion out of the steppe is that of the Indo-Europeans, who spread their languages into the Middle East, South Asia, and the borders of China, where the Tocharians resided. The northernmost part of Asia, including much of Siberia, was largely inaccessible to the steppe nomads, owing to the dense forests, climate and tundra. These areas remained very sparsely populated.

The center and the peripheries were mostly kept separated by mountains and deserts. The Caucasus and Himalaya mountains and the Karakum and Gobi deserts formed barriers that the steppe horsemen could cross only with difficulty. While the urban city dwellers were more advanced technologically and socially, in many cases they could do little in a military aspect to defend against the mounted hordes of the steppe. However, the lowlands did not have enough open grasslands to support a large horsebound force; for this and other reasons, the nomads who conquered states in China, India, and the Middle East often found themselves adapting to the local, more affluent societies.

The Islamic Caliphate took over the Middle East and Central Asia during the Muslim conquests of the 7th century. The Mongol Empire conquered a large part of Asia in the 13th century, an area extending from China to Europe. Before the Mongol invasion, Song dynasty reportedly had approximately 120 million citizens; the 1300 census which followed the invasion reported roughly 60 million people.

The Black Death, one of the most devastating pandemics in human history, is thought to have originated in the arid plains of central Asia, where it then travelled along the Silk Road.

The Russian Empire began to expand into Asia from the 17th century, and would eventually take control of all of Siberia and most of Central Asia by the end of the 19th century. The Ottoman Empire controlled Anatolia, the Middle East, North Africa and the Balkans from the 16th century onwards. In the 17th century, the Manchu conquered China and established the Qing Dynasty. The Islamic Mughal Empire and the Hindu Maratha Empire controlled much of India in the 16th and 18th centuries respectively.