Farm animals or "livestock" generally are raised for subsistence or for profit. Raising animals (animal husbandry) is an important component of modern agriculture. It has been practised in many cultures since the transition to farming from hunter-gather lifestyles.

Animal-rearing has its origins in the transition of cultures to settled farming communities rather than hunter-gatherer lifestyles. Animals are ‘domesticated’ when their breeding and living conditions are controlled by humans.

Over time, the collective behaviour, life cycle, and physiology of livestock have changed radically. Many modern farm animals are unsuited to life in the wild.

Older English sources, such as the King James Version of the Bible, refer to livestock in general as "cattle", as opposed to the word "deer", which then was used for wild animals which were not owned. The word cattle is derived from Middle English chatel, which meant all kinds of movable personal property, including of course livestock, which was differentiated from non-movable real-estate ("real property"). In later English, sometimes smaller livestock was called "small cattle" in that sense of movable property on land, which was not automatically bought or sold with the land. Today, the modern meaning of "cattle", without a qualifier, usually refers to domesticated bovines (see Cattle). Other species of the genus Bos sometimes are called wild cattle.

The term "livestock" is nebulous and may be defined narrowly or broadly. On a broader view, livestock refers to any breed or population of animal kept by humans for a useful, commercial purpose. This can mean domestic animals, semi-domestic animals, or captive wild animals. Semi-domesticated refers to animals which are only lightly domesticated or of disputed status. These populations may also be in the process of domestication. Some people may use the term livestock to refer to only domestic animals or even to only red meat animals. 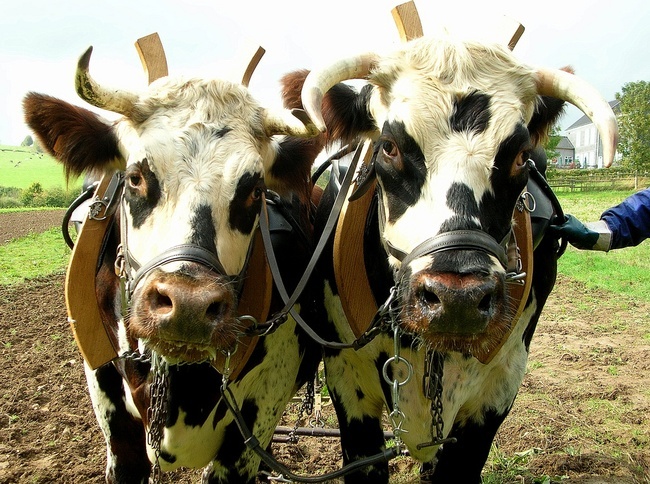 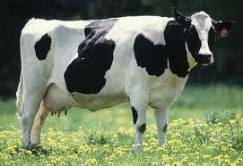 Cattle (colloquially cows) are the most common type of large domesticated ungulates. They are a prominent modern member of the subfamily Bovinae, are the most widespread species of the genus Bos, and are most commonly classified collectively as Bos primigenius. Cattle are raised as livestock for meat (beef and veal), as dairy animals for milk and other dairy products, and as draft animals (oxen / bullocks) (pulling carts, plows and the like). Other products include leather and dung for manure or fuel. In some countries, such as India, cattle are sacred. It is estimated that there are 1.3 billion cattle in the world today. In 2009, cattle became the first livestock animal to have its genome mapped. 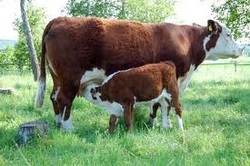 Calves; singular calf are the young of domestic cattle. Calves are reared to become adult cattle, or are slaughtered for their meat, called veal."Calf" is the term used from birth to weaning, when it becomes known as a weaner or weaner calf, though in some areas the term "calf" may be used until the animal is a yearling. The birth of a calf is known as calving.

A calf that has lost its mother is an orphan calf, also known as a poddy or poddy-calf in British English.

Bobby calves are young calves which are to be slaughtered for human consumption.

A vealer is a fat calf weighing less than about 330 kg (730 lb) which is at about eight to nine months of age. A young female calf from birth until she has had a calf of her own is called a heifer.

Calf meat for human consumption is called veal; also eaten are calf's brains and calf liver. The hide is used to make calfskin, or tanned into leather and called "Novillo," Spanish for steer. The fourth compartment of the stomach of slaughtered milk-fed calves is the source of rennet. The intestine is used to make Goldbeater's skin, and is the source of Calf Intestinal Alkaline Phosphatase (CIP).

Dairy cows can only produce milk after having calved, and so every dairy cow is allowed to produce one calf each year throughout her productive life. On average one of these calves will become a replacement dairy cow, and some of the rest may be reared for beef or veal; however some are effectively produced solely to allow the cow to produce milk. 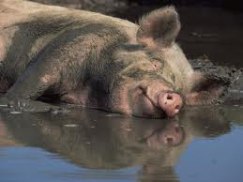 A pig is any of the animals in the genus Sus, within the Suidae family of even-toed ungulates. Pigs include the domestic pig, its ancestor the wild boar, and several other wild relatives. Pigs are omnivores and are highly social and intelligent animals.Domesticated pigs are commonly raised as livestock by farmers for meat (generally called pork, hams, gammon or bacon), as well as for leather. Their bristly hairs are also used for brushes. Some breeds of pig, such as the Asian pot-bellied pig, are kept as pets.


Pigs that are allowed to forage may be watched by swineherds. Because of their foraging abilities and excellent sense of smell, they are used to find truffles in many European countries.
Both wild and feral pigs are commonly hunted.

The domestic pig (Sus scrofa domesticus) is usually given the scientific name Sus scrofa, although some authors call it S. domesticus, reserving S. scrofa for the wild boar. It was domesticated approximately 5,000 to 7,000 years ago. Their coats are coarse and bristly. They are born brownish coloured and tend to turn more grayish coloured with age. The upper canines form sharp distinctive tusks that curve outward and upward.

Compared to other artiodactyles, their head is relatively long, pointed, and free of warts. Their head and body length ranges from 0.9 to 1.8 m and they can weigh between 50 and 350 kg.

Pigs are intelligent and can be trained to perform numerous tasks and tricks. Recently, they have enjoyed a measure of popularity as house pets, particularly the dwarf breeds. 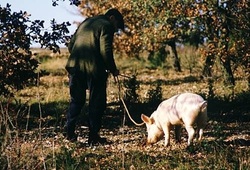 Pigs have other roles within the human economy: their feeding behaviour in searching for roots churns up the ground and makes it easier to plough; their sensitive noses lead them to truffles, an underground fungus highly valued by humans; and their omnivorous nature enables them to eat human rubbish, keeping settlements cleaner. 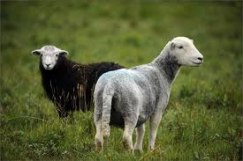 Sheep (Ovis aries) are quadrupedal, ruminant mammals typically kept as livestock. Like all ruminants, sheep are members of the order Artiodactyla, the even-toed ungulates. Although the name "sheep" applies to many species in the genus Ovis, in everyday usage it almost always refers to Ovis aries. Numbering a little over one billion, domestic sheep are also the most numerous species of sheep.Sheep are most likely descended from the wild mouflon of Europe and Asia. One of the earliest animals to be domesticated for agricultural purposes, sheep are raised for fleece, meat (lamb, hogget or mutton) and milk. A sheep's wool is the most widely used animal fiber, and is usually harvested by shearing.

Ovine meat is called lamb when from younger animals and mutton when from older ones. Sheep continue to be important for wool and meat today, and are also occasionally raised for pelts, as dairy animals, or as model organisms for science.

Sheep husbandry is practised throughout the majority of the inhabited world, and has been fundamental to many civilizations. In the modern era, Australia, New Zealand, the southern and central South American nations, and the British Isles are most closely associated with sheep production.

Domestic sheep are relatively small ruminants, usually with a crimped hair called wool and often with horns forming a lateral spiral. Domestic sheep differ from their wild relatives and ancestors in several respects, having become uniquely neotenic as a result of selective breeding by humans.  A few primitive breeds of sheep retain some of the characteristics of their wild cousins, such as short tails. Depending on breed, domestic sheep may have no horns at all (i.e. polled), or horns in both sexes, or in males only. Most horned breeds have a single pair, but a few breeds may have several.

Another trait unique to domestic sheep as compared to wild ovines is their wide variation in color. Wild sheep are largely variations of brown hues, and variation within species is extremely limited. Colors of domestic sheep range from pure white to dark chocolate brown and even spotted or piebald. Selection for easily dyeable white fleeces began early in sheep domestication, and as white wool is a dominant trait it spread quickly.

However, colored sheep do appear in many modern breeds, and may even appear as a recessive trait in white flocks. While white wool is desirable for large commercial markets, there is a niche market for colored fleeces, mostly for handspinning.  The nature of the fleece varies widely among the breeds, from dense and highly crimped, to long and hair-like. There is variation of wool type and quality even among members of the same flock, so wool classing is a step in the commercial processing of the fibre.