﻿Wool, Fur and Leather: Hazardous to the Environment﻿

There is nothing “natural” about clothing made from animals’ skin or fur. In addition to causing the suffering and deaths of millions of animals each year, the production of wool, fur, and leather contributes to climate change, land devastation, pollution, and water contamination.

How Fur Production Harms the Environment
Eighty-five percent of the fur industry’s skins come from animals on fur factory farms.(1) These farms can house thousands of animals, and as with other factory farms, they are designed to maximize profits—with little regard for the environment or animals’ well-being.

Each mink skinned by fur farmers produces about 44 pounds of feces in his or her lifetime.(2) That adds up to 1 million pounds of feces produced annually by U.S. mink farms alone.(3) One dangerous component of this waste is nearly 1,000 tons of phosphorus, which wreaks havoc on rivers and streams.(4) For instance, when a Washington state mink farm was charged with polluting a nearby creek, the fecal coliform levels measured in the water were as much as 5,000 times in excess of the legal limit.(5)

According to Sandy Parker Reports, a fur-industry publication, “Tougher anti-pollution rules and stricter enforcement by government agencies are causing increasing problems for fur farmers in parts of the U.S. …. Nitrates, phosphates and other substances running off with rainwater or seeping into aquifers and polluting local water supplies are increasingly coming to the attention of environmental protection agencies and they are clamping down hard.”(6)


Raising animals for their fur also pollutes the air. In Denmark, where more than 14 million minks are killed for their fur each year, more than 8,000 pounds of ammonia is released into the atmosphere annually.(7,8) 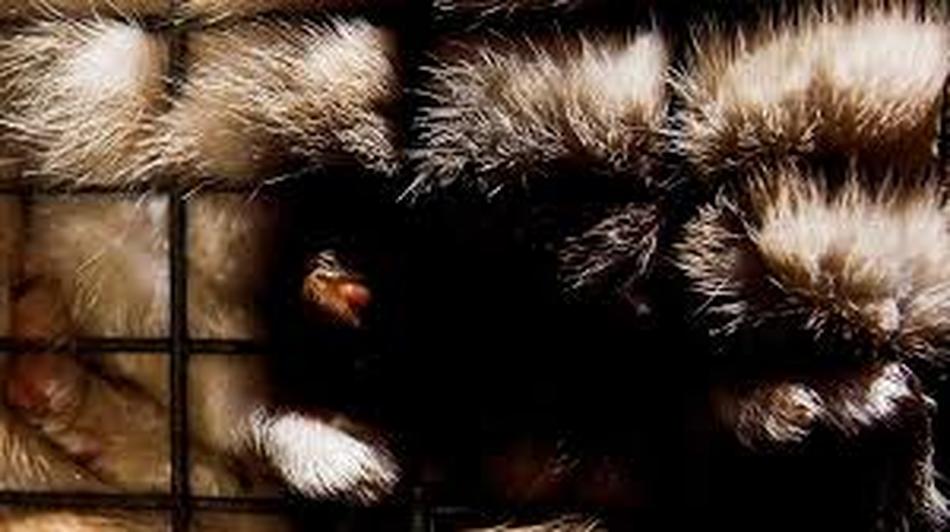 Why Finished Fur Is Anything but ‘Natural’
Fur is only “natural” when it’s on the animal born with it. Once an animal has been slaughtered and skinned, his or her fur is treated with a soup of toxic chemicals to “convert the putrefactive raw skin into a durable material” (i.e., to keep it from rotting in the buyer’s closet).(9) Various salts—along with ammonia, formaldehyde, hydrogen peroxide, and other chromates and bleaching agents—are used to preserve and dye fur.(10) Much of the world’s fur is processed in China, where environmental regulations are often ignored. According to Professor Cheng Fengxia of Shaanxi University of Science and Technology, “Pollution caused by inappropriate processing, especially coloring the fur, has also become a headache.”(11)

Fur-farm pollution is further compounded when all aspects of farmed-fur production are considered: Fur processing requires transporting feed to animals; removing animals’ waste; providing electricity for housing facilities, the slaughter process, and other operations; using pesticides, vaccines, and antibiotics; transporting carcasses; transporting pelts to auction; transporting pelts to a fur tannery, which involves sorting, soaking, fleshing, tanning, wringing, drying, cleaning, trimming, buffing, and finishing; and transporting tanned pelts to a garment maker, a wholesaler, and so on. When all these processes are taken into account, a fur garment takes 20 times more energy to produce than a faux-fur garment.(12)

No federal humane slaughter law protects animals on fur factory farms, and killing methods are gruesome. For more information on the intolerable suffering that animals endure, please see PETA’s factsheets on the fur-farming and trapping industries. 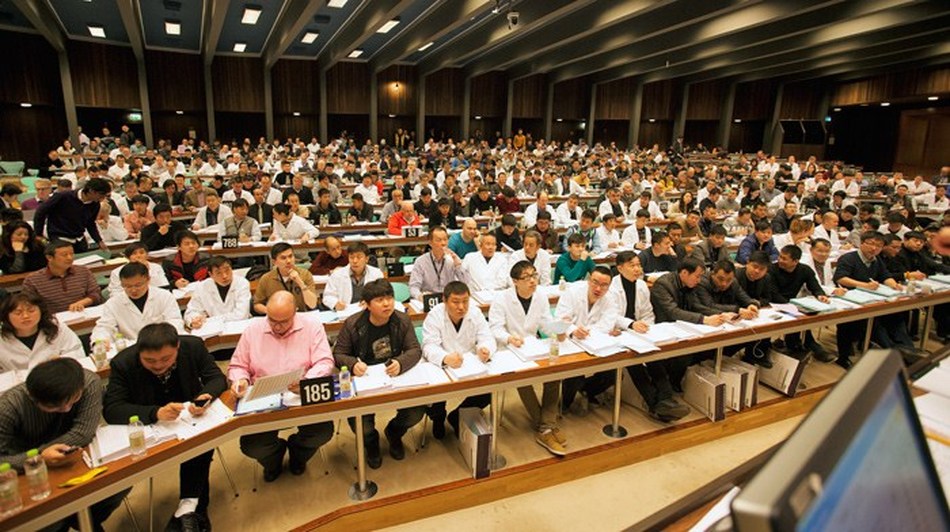 How Leather Production Harms the Environment
Until the late 1800s, animal skin was air- or salt-dried and tanned with vegetable tannins or oil, but today animal skin is turned into finished leather with a variety of much more dangerous substances, including mineral salts, formaldehyde, coal-tar derivatives, and various oils, dyes, and finishes—some of them cyanide-based.

Most leather is chrome-tanned. All wastes containing chromium are considered hazardous by the U.S. Environmental Protection Agency. The waste from tanneries also includes large quantities of other pollutants, including protein, hair, salt, lime sludge, sulfides, and acids. Furthermore, a chrome-tanning facility wastes nearly 15,000 gallons of water and produces up to 2,200 pounds of “solid waste” (e.g., hair, flesh, and trimmings) for every ton of hides that it processes.(13) Leather tanning also generates 800,000 tons of chrome shavings annually, and much of this chromium waste ends up in landfills.(14)

Groundwater near tanneries has been found to have highly elevated levels of a variety of toxic substances. The Regis Tanning Co., Inc., operated a tanning facility in New Hampshire from the early 1950s until 1972. But more than 20 years after it closed down, groundwater samples collected in the area revealed that arsenic, chromium, lead, and zinc were all still present—likely because of wastes disposed of on the property—while samples taken from nearby Lamprey River and its wetlands indicated the presence of cyanide, chromium, and polychlorinated biphenyls (PCBs).(15)

More than 500 tanneries in three districts of India were charged with polluting some 16,000 hectares of agricultural land and contributing to drought conditions that were “not due to failure of monsoon or other natural causes termed as Act of God, but … purely man-made.”(16)
How Leather Production Harms People
The toxic groundwater near tanneries has caused health problems for residents in surrounding areas. The U.S. Centers for Disease Control and Prevention found that the incidence of leukemia among residents near one tannery in Kentucky was five times the national average.(17) Arsenic, a common tannery chemical, has long been associated with lung cancer in workers who are exposed to it on a regular basis.(18) Several studies have established links between sinus and lung cancers and the chromium used in tanning. Studies of leather-tannery workers in Sweden and Italy found cancer risks “between 20% and 50% above [those] expected.”(19)

Because of the acknowledged hazards of leather production, the process is being discontinued in most European countries and the U.S., and operations are moving overseas. Bangladesh Tanners Association President M. Harun Chowdhury said, “Most of the European countries and USA are discontinuing leather processing, as [the] leather industry is an environmentally hazardous one.”(20) As a result, the health of people in other parts of the world is now being threatened by the tanning industry. In Bangladesh, 90 percent of the leather exported comes from a slum where tanneries’ wastewater isn’t even treated. According to a Human Rights Watch report, the contaminated water flows into the nearby river and “[w]hile the government takes a hands-off approach, local residents fall sick and workers suffer daily from their exposure to harmful tannery chemicals.”(21)

The health of 3.5 million people in Ranipet, India, has been jeopardized by a factory that produces the salts used in nearby tanneries, according to a report issued by the Blacksmith Institute, a group that works with scholars, scientists, and nongovernmental organizations to reduce pollution in developing nations.(22) The group, which included the area in its annual “Dirty Thirty” list of the world’s most contaminated sites, noted that groundwater and land had been contaminated from waste runoff. Furthermore, it reported that farmers suffered from skin ulcerations when they came into contact with the water supply. In 2012, the institute listed “tanneries” at number four on the top 10 list of the world’s “Toxic Pollution Problems.”(23)

Studies have shown that even finished leather products—especially those in direct contact with the skin, such as gloves or shoes—contain high levels of a toxic chemical called hexavalent chromium, considered to be a strong allergen that can lead to skin reactions like eczema. One German study found the substance in more than half the leather products it examined.(24)

Above all, the process of turning skin into leather is cruel to animals, some of whom are slaughtered as babies, spend their entire lives in confinement, or are skinned or boiled alive for their hides. For more information, please see PETA’s leather factsheet.

How Wool Production Harms the Environment
Without human interference, sheep grow just enough wool to protect themselves from temperature extremes. The invention of shears led humans to breed sheep for continuous fleece, and subsequently, land has been cleared and trees have been cut down to make room for grazing sheep, which has led to increased soil salinity, erosion, and decreased biodiversity.

Oxford University researchers studying land degradation in Karoo, South Africa, reported that large numbers of farmed animals, especially sheep, were responsible for an unfavorable change in vegetation and erosion that led to the formation of badlands (heavily eroded, barren areas) and gully systems.(25)

In the first half of the 20th century, Patagonia, Argentina, was second to Australia in wool production. But local sheep farmers’ scale of operations outgrew the ability of the land to sustain them. Soil deterioration in the region triggered a desertification process that, according to National Geographic, “brought the industry to its knees.” More than 50 million acres in one province alone have been “irrevocably damaged because of overstocking.”(26)

Not only does animal agriculture consume huge amounts of water, chemicals used for wool production can also pollute existing water supplies. More than 9,000 pounds of insecticides were applied to sheep in the U.S. alone in 2010.(27) According to a 2004 technical memo from the Environmental Agency of New South Wales, Australia, an “investigation of a major decline in the invertebrate fauna of the upper Teifi has established that the major causal factor is pollution by sheep dip pesticides.”(28)
What You Can Do
With so many great alternatives to fur, leather, and wool available, there’s no reason to wear the fur, skin, or fleece of any animal.

There are many plant-based, sustainable, and renewable fabrics available, including hemp, cotton, bamboo, and linen. Designers such as Polo Ralph Lauren, Calvin Klein, Kenneth Cole, Tommy Hilfiger, and Stella McCartney don’t use fur in their collections, and stores such as J.Crew, Gap Inc., Express, and Ann Taylor do not sell fur items.

There are many alternatives to leather, including cotton, linen, rubber, ramie, canvas, and synthetics. Chlorenol (called “Hydrolite” by Avia and “Durabuck” by Nike) is perforated for breathability and is used in athletic and hiking shoes. It stretches around the foot with the same “give” as leather, gives good support, and is machine-washable. Designers such as Liz Claiborne, Capezio, Sam & Libby, Steve Madden, and Nike offer an array of nonleather handbags, wallets, and shoes.

People with allergies to wool have been using cotton, cotton flannel, polyester fleece, Tencel, synthetic shearling, and other cruelty-free fibers for years. Buy clothing from retailers, including H&M, Abercrombie & Fitch, Timberland, Perry Ellis, and Limited Brands, that have pledged not to sell Australian merino wool products until the worst abuse—mulesing (live flaying) and live exports—have ended.