Dogfights in Japan Are a Family Outing.
Hiroshi Sudo takes a pair of pliers, clamps them around a dog’s tooth and twists. The tooth comes free in a spray of bloody spittle. The dog snarls, but Sudo has tied a washcloth around his snout so he can’t bite. Sudo hands the tooth to the dog’s owner, who puts it under a hose, then wipes it off with a rag and pockets it. Later, he’ll drill a hole through it, string a leather cord through the hole and wear it around his neck, a grisly memento.
On weekdays, Sudo is a veterinarian at an animal hospital in Toride, about 25 miles northeast of Tokyo.

On weekends, he moonlights at dogfights, stitching up cuts and pulling loose teeth. “We do the bare minimum here,” he says through a translator. “Emergency response.” For anything more serious, he recommends that dog owners visit an animal hospital. But that’s not an option today, because it’s Sunday, the one day in the week when most animal hospitals, like most businesses in Japan, are closed.

It’s not uncommon for these fighting dogs to die. “It happens, but not that many,” Sudo says. The dogs, he explains, are like marathon runners: Sometimes they push themselves too far. But vets like Sudo try not to let that happen. He picks up a needle and thread and goes back to his work. 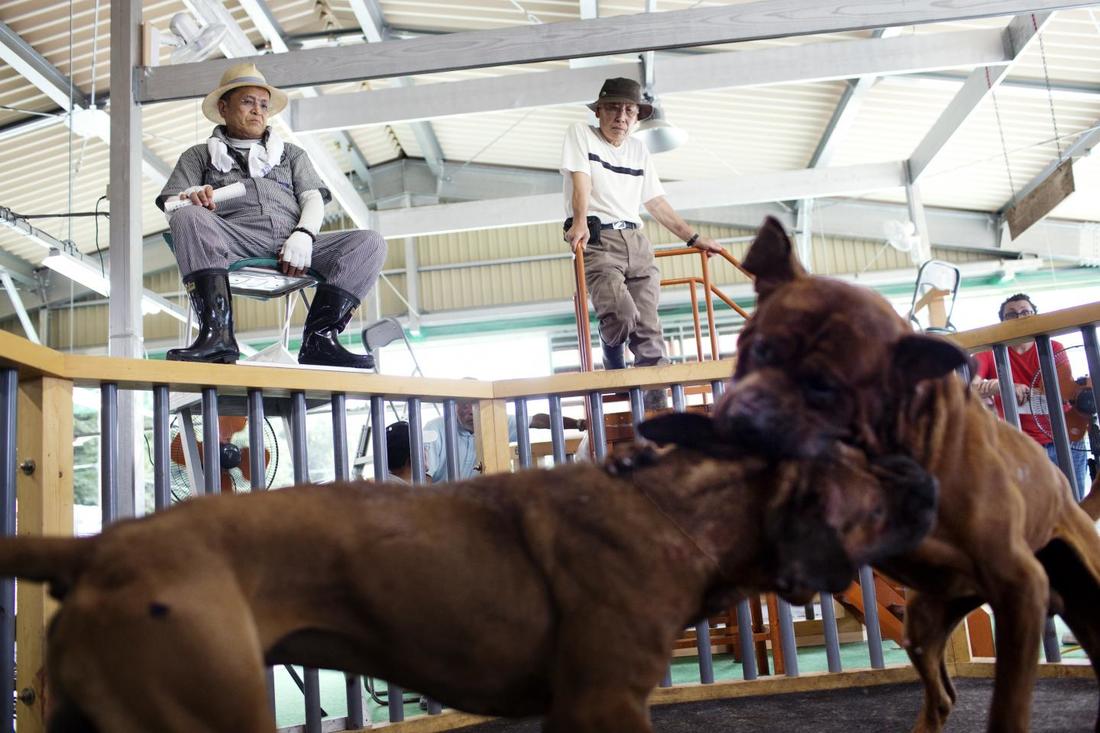 Dogfighting at Bando, a small farming town two hours northeast of Tokyo.
No permits or licenses are required to fight dogs, so there’s no official record of how many fights happen each year. Teruaki Sudo, president of the East Japan Dog Fighting Association (and Hiroshi’s father), says his group holds eight or nine tournaments per year, while smaller groups might hold two or three. Between 60 and 100 dogs might fight in a small tournament. In a large tournament, that number could be as high as 250. It’s impossible to say how many fights happen off the books each year, especially if you count pit bull fights, which are almost entirely sponsored by the Japanese mafia, or yakuza.

Only five of the country’s 47 prefectures have laws against dogfighting. Tokyo is one of them, so Tokyoites like Sudo come to the sticks, to places like Bando, a smallish farming town two hours northeast of the capital, to fight. Dogfights are loud, Sudo explains, “so it should be in a place where almost no one lives. So we set up this facility.”

The facility is a giant metal shed next to a landfill. Inside are three wooden octagons, about 12 feet in diameter, each squatting atop a raised dais. Three small platforms are bolted to the sides of each octagon. Atop each platform is a single folding chair, and on each chair sits a judge. Sometimes, a fourth judge will observe from ground level. Two larger steel platforms are affixed at opposite sides of each octagon, giving the dogs’ owners an unobstructed view. 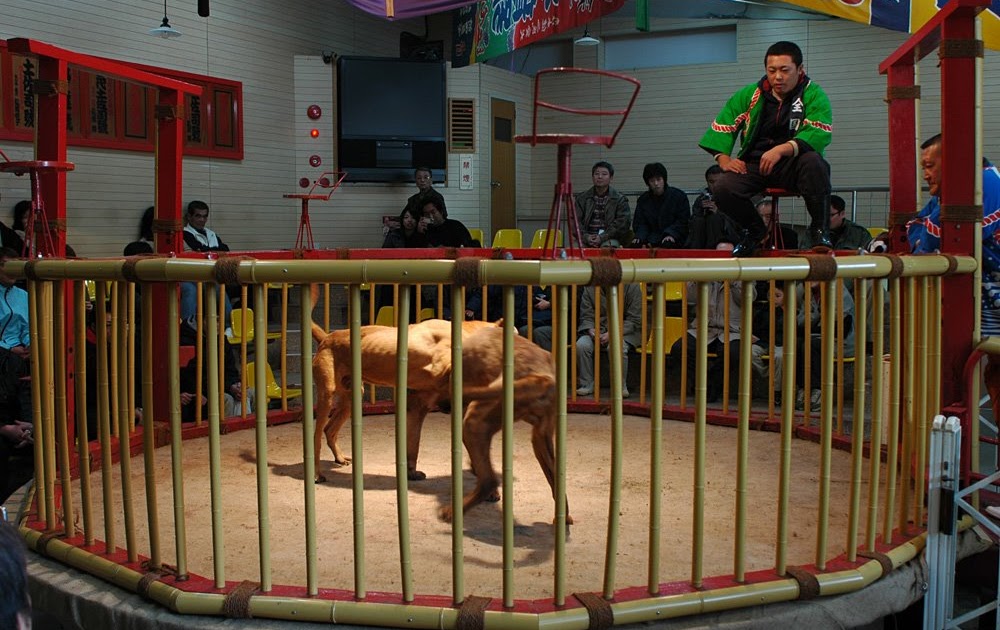 In Japan, dogfights are family outings. Outside the arena, people cook yakitori skewers over makeshift grills, and kids eat watermelon and bento. Inside, rows of folding tables are set up for the crowd. They smoke, fan themselves and drink green tea from little plastic cups. The temperature is pushing 100 degrees, and some men’s tattoos are visible through their thin cotton shirts.

The day’s first blood is spilled before any dogs enter the ring. As one ascends the ramp, the other barrels from the octagon and sinks his teeth into his opponent’s neck. The aggressor clamps down and jerks his head sideways, bringing his opponent around with him, pulling him by the scruff of the neck. The announcer begins shouting. The crowd pulls back, those closest to the dogs scattering out of the way for their own safety, the rest forming a loose ring around them.

A few seconds later, the dogs’ owners grab them by their tails and try to pull them apart. A full-grown Tosa Inu—sometimes called a Japanese mastiff, the only breed used in traditional Japanese dogfighting—can weigh nearly 200 pounds. It takes six men to pull them apart. They bring up a hose that blasts pressurized air into the dogs’ faces and jam plastic wedges into the dogs’ mouths to lever open their jaws. Finally, they come apart. The aggressor's owner hauls his dog back into the ring. The other strains to follow.
The dogs spend another 10 minutes or so biting and clawing before one yelps—a sign of surrender—and the match is called. There’s no winner. 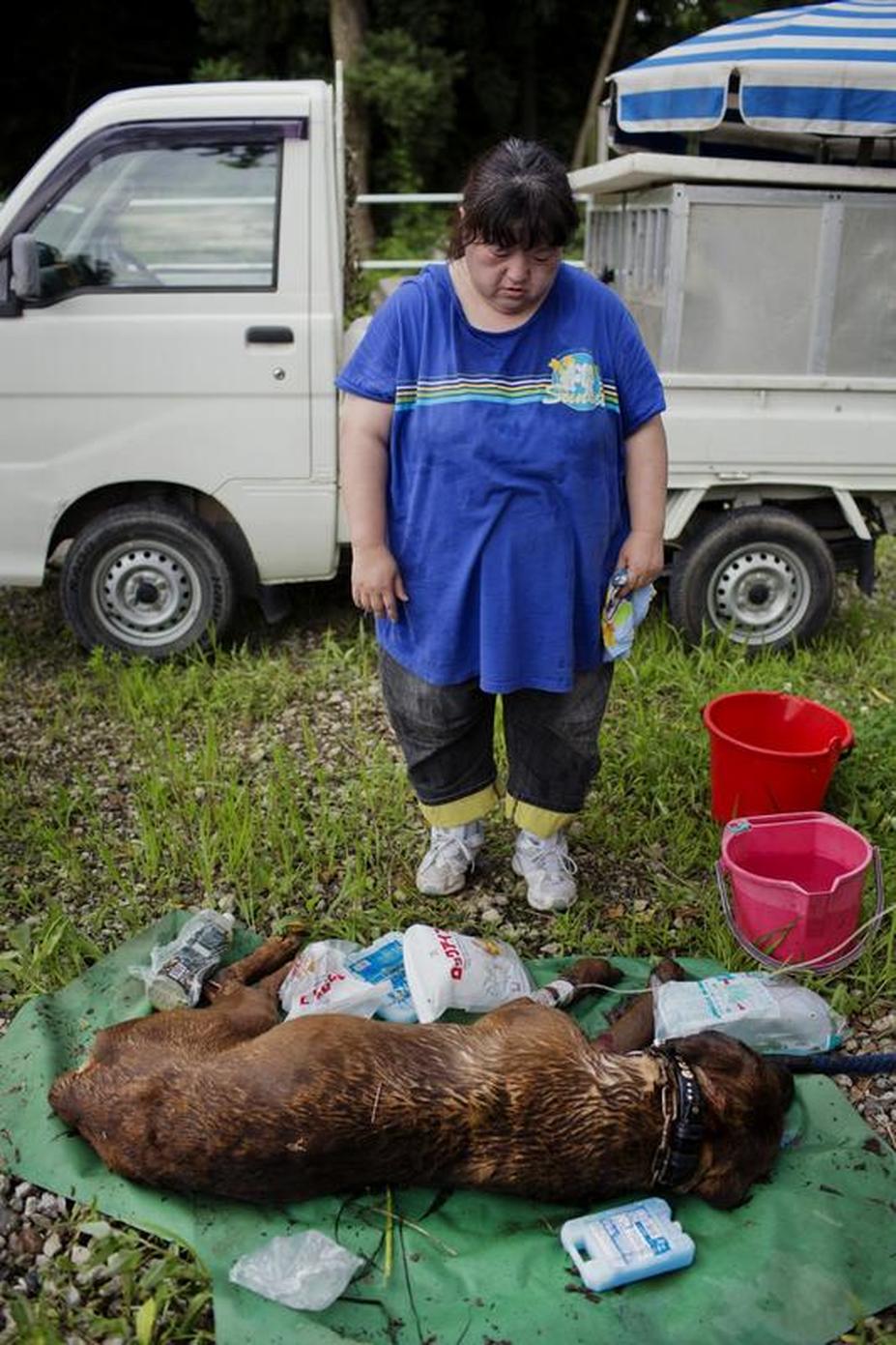 Dogs are sometimes killed in the ring or die later from their injuries, but even the survivors, like this one, are exhausted by the end of a match.
Compared with those of other developed countries, Japan’s animal rights law—there’s only one on the national level—is fairly weak. The Welfare and Management of Animals Act, passed in 1973, is “completely ineffective,” says Elizabeth Oliver, a British expat who started the nonprofit group Animal Rescue Kansai in 1991. In the 25 years since the law was passed, “nothing has improved,” she says. Sakiko Yamazaki, a freelance animal welfare consultant in Japan, calls the law “fairly decent” but says it’s “not really being enforced to its maximum potential.”

That’s partly because the law is so vague. While it makes injuring an animal “without reason” a crime, it doesn’t say what a good reason might be. But even in clear-cut cases of animal cruelty, the police rarely act, Oliver says. Since the law was passed, police have shut down only one pet shop in Tokyo for breaking it.

On paper, most Japanese animal welfare groups oppose dogfighting. “We think making animals fight each other is itself cruelty to animals,” says Chizuko Yamaguchi, a veterinary inspector at the Japan Animal Welfare Society (JAWS), Japan’s oldest and biggest animal welfare group, in an email to Newsweek.

But neither JAWS nor any other group has made a concerted effort to ban dogfighting—for two reasons. The first is the perception that it is a Japanese tradition. The “dog men,” as dogfighters are called, say it’s part of their country’s cultural history, much like whaling or dolphin hunting. Enough members of the parliament agree with them to block changes to the law, Yamaguchi says.

The other reason is dogfighting’s deep ties to the yakuza. “In Japan, anything to do with dogs is run by gangsters,” Oliver says. “In the old days, they made money from prostitution and gunrunning, but now they make a huge profit in the pet business.” 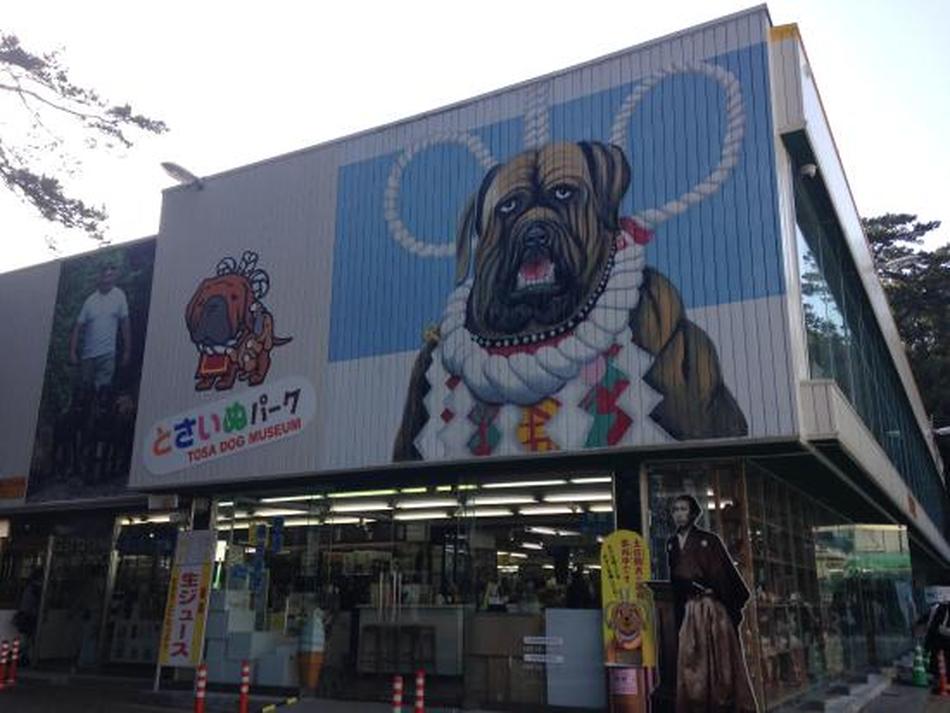 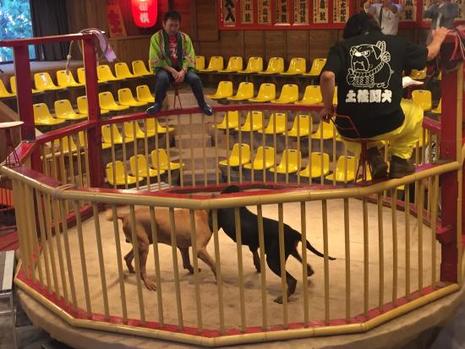 A Tosa needs just the right balance of smarts and stupidity to be a fighting dog. “If a dog is too smart, it won’t fight, because it doesn’t like to be bitten by other dogs. If a dog is stupid, it has no technique,” explains Takashi Hirose, who runs the Tosa Inu Park, a museum-slash-arena about 30 minutes south of Kochi City, on the island of Shikoku.

Japan’s dog men call what they do token—the straight translation is “fighting dogs.” Token is old. How old, exactly, we don’t know, but it has its deepest roots in Kochi. Tosas are native to this area, and people here have been fighting dogs for at least 400 years. The local baseball team is even called the Kochi Fighting Dogs.

Hirose traces dogfighting’s popularity in Kochi back to Chosokabe Motochika, a 16th-century warlord who once ruled all of Shikoku. Motochika encouraged dogfighting among his soldiers as a morale booster, Hirose says. An image of Motochika in full armor and brandishing a spear greets visitors to the park, of which Hirose says there are about 700,000 annually.

Much of the token tradition is borrowed from Japan’s national sport, sumo, in which nearly every movement a fighter takes before and after he enters the ring is imbued with ritual significance. The dogs may not take it as seriously, but their owners do. They call their pastime inuzumo—literally, “dog sumo.”

Like sumo, token is a sport, they say. What it isn’t is animal cruelty. “If a dog doesn’t have fighting spirit, we don’t put it in the ring,” says Teruaki Sudo. And if dogs with so-called fighting spirit aren’t allowed to fight, their aggression comes out in other ways, the owners say.
But animal rights advocates say fighting spirit is just a fancy way of saying selective breeding for aggression. “Any animal can be made that way,” says Keiko Yamazaki, a board member of the Japanese Coalition for Animal Welfare. “If you kick them in the ass and send them in the arena to go fight another dog, they have no choice,” she adds. “If they say they have no other way to vent off their so-called innate aggression, that would mean these dogs are dangerous, so you would ask them to stop breeding them.” 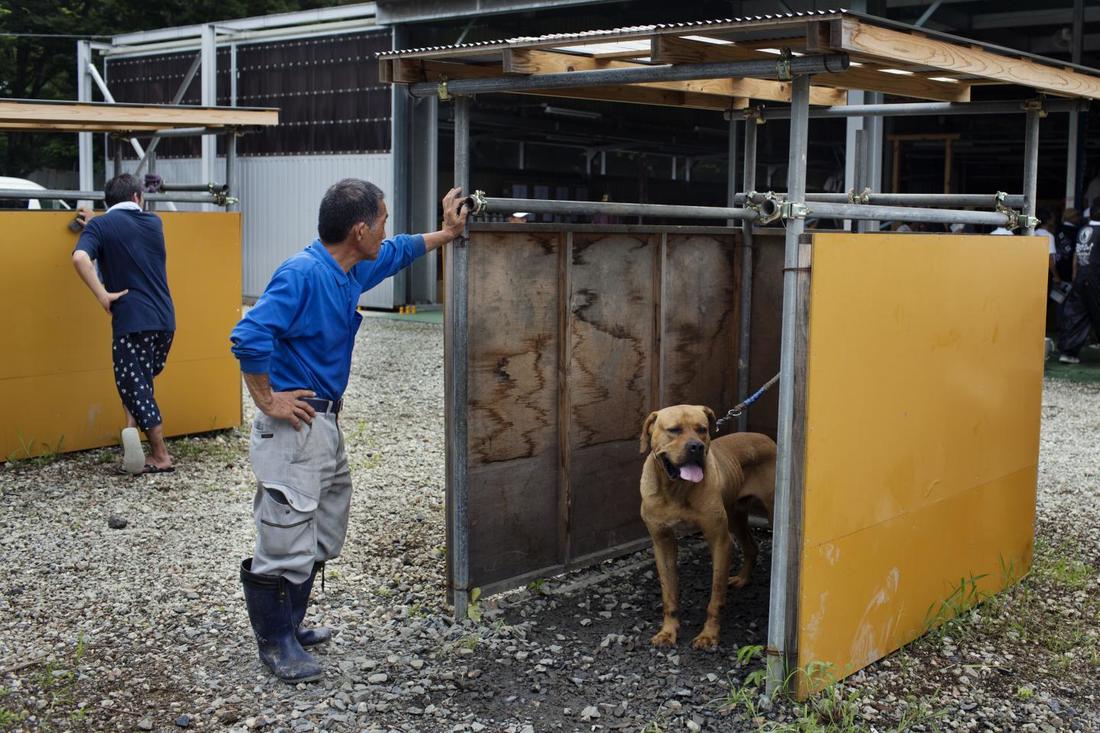 Animals rights advocates would like to see the dog fights stop, but many trainers have argued it is a part of their tradition.
Tattoos of scenes from Japanese mythology cover most of Yoshiaki Nakata’s body, except his legs from the knees down and a thin strip that runs from his sternum to his crotch. Nakata, who is chairman of the National Dog Fighting Association, wears head-to-toe white, with gold-rimmed, lavender-tinted sunglasses. A woman in sequined gold pants who introduces herself as his wife slides a fat diamond ring onto his left hand before he takes a seat to watch the championship match in Bando. If he isn’t a yakuza—and he says he isn’t—then he is trying very hard to look like one.

The match is between two veterans: a brown dog called Yume (dream) and a black dog called Bontenmaru. With all their scars and bald patches where past competitors have torn off chunks of fur, their coats look like weird organic jigsaws. Their missing teeth bob from their owners’ necks as they shout at them from atop the octagon.

Their fight lasts a little less than 10 minutes. By the end, both animals are panting. Ropes of drool thick with blood ooze from their mouths. They’re cut in dozens of places, and chunks of their fur carpet the arena. Their flanks heave like bellows.

Both dogs are spent; neither can go on, but neither will surrender either. Whichever dog quits first loses. Yume looks back at his owner with a pleading look. Bontenmaru’s owner yells at him to fight on. “Baka! Baka!” he yells (“Stupid! Stupid!”).

Neither dog will fight. After three minutes of inaction, the match is called a draw. The owners jump into the ring, grab their dogs and pull them out.
When the dogs are well clear, everyone—judges, owners, spectators—helps with the cleanup. Japanese kids are taught to clean up after themselves in school. Since the kids do all the work, Japanese schools don’t have janitors. The same, apparently, is true of dogfights.

With the ring cleared, the awards ceremony can begin. The owners trundle in, one by one, to receive their prizes. The weakest dogs win the worst prizes—boxes of tissues and mosquito repellent. The better fighters get electric fans, microwaves and flat-screen TVs. At bigger fights, the winners sometimes get cars.

The day’s overall winner, a dog called Lai, ends the day on a low note.
Lai looks for all the world as if he’s dying. His owners have thrown down a green tarp by the side of the road, and Lai is lying on his side on top of it. There’s blood on the tarp. Heat exhaustion, his owners say. They’ve covered his body in ice packs and doused him in cold water, and Hiroshi Sudo, the vet, has given him an IV of cold saline to lower his temperature.