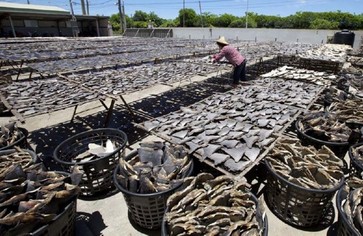 (2012) It’s estimated that as many as 73 million sharks are killed annually by long line fishermen for a bowl of soup. Long considered a delicacy in Chinese cooking, shark fin soup was once a dish reserved only for royalty. The soup itself tastes of nothing. Almost like plain rice noodles and while the broth is certainly good, the fin itself adds nothing.

This symbol of status can now be bought for upwards of $400 in upscale restaurants making it one of the most expensive soups in the world. This strive for status has contributed to the decimation of 95 percent of the species since the 1970s. 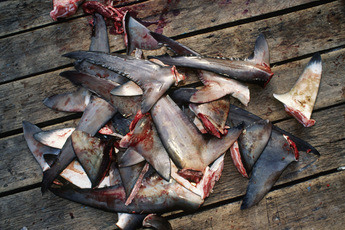 Unfortunately, the number of sharks being killed for what amounts to 3 percent of its body is not what is most appalling. In probably one of the most barbaric and wasteful acts committed by human beings, hooked sharks have their fins sliced off, while they’re still alive. The actual meat of the shark however has little or no value to fisherman. What’s left of the shark, still wriggling in agony, is generally dumped back into the water where the shark will eventually drown.

Despite this, saving sharks from this cruel fate and eventual extinction is still in contention. In June 2012, the New York State Senate did not vote on a bill banning the sale of imported shark fins. As a result, over 50 restaurants in New York City’s Chinatown will continue to serve shark fin soup.

Some have argued that sharks aren’t worth saving. Species go extinct every day and sharks are predators after all; a danger to human beings. However, shark finning poses a real threat; not to just sharks but all marine life. When a species of shark goes extinct, other species in its ecosystem face problems with overpopulation that disrupt the entire food chain. No bowl of soup is worth that. 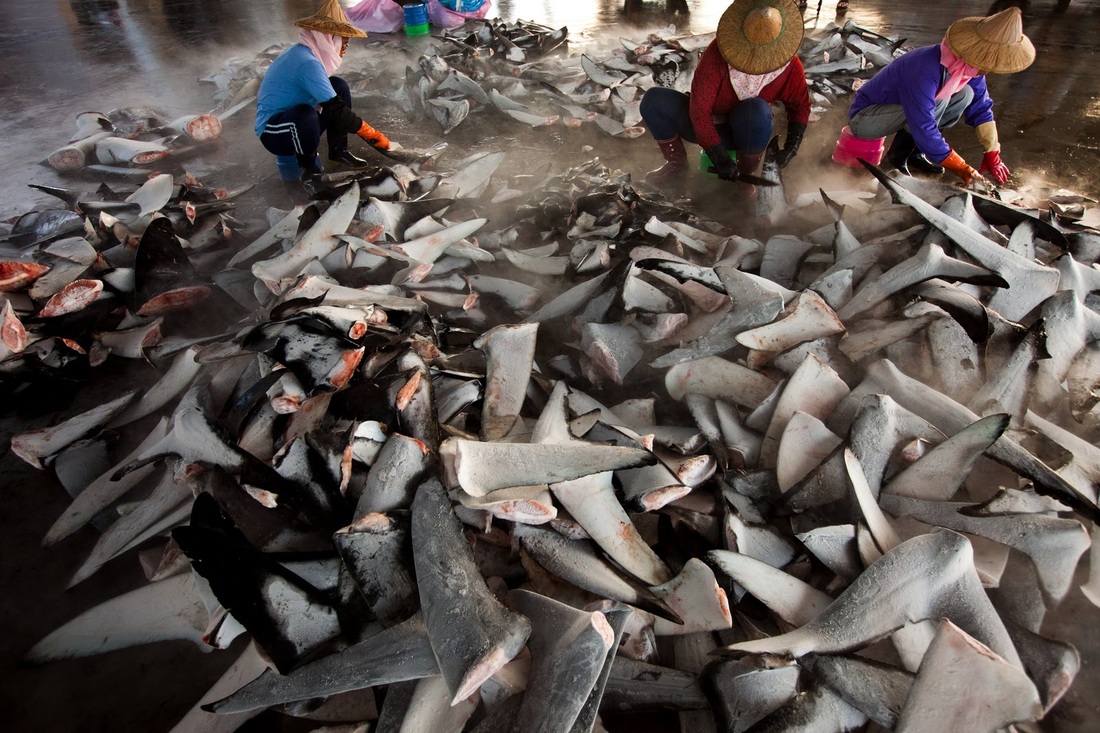 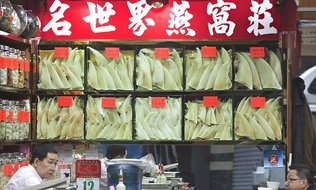 The ban, reported by Xinhua, the state-run news agency, could take as many as three years to take effect, and it remains unclear how widely it will be adhered to across a sprawling nation where orders issued by Beijing are often shrugged off by officials in faraway regions and provinces.

Still, the decision to stop serving shark fin soup at official functions was welcomed by environmental campaigners. Experts have long cautioned that soaring demand for the soup over the past two decades has imperiled shark populations around the globe.

“This is a very positive step forward,” said Andy Cornish, director of conservation at W.W.F. in Hong Kong. “It is the first time that the Chinese central government has expressed a decision to phase out shark fin from banquets funded by taxpayers’ money.” He said the move would send an important signal to consumers in China, the largest market for the fins. 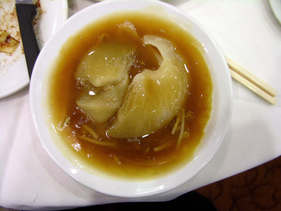 The soup, brewed from dried shark fins, is largely tasteless and slithery but has considerable cachet as a status symbol. Many in China consider it a must-serve at lavish, multicourse banquets to celebrate weddings, anniversaries and corporate and state events.

Retailers in Hong Kong, the main hub for the international trade in the fins, charge more than 2,000 Hong Kong dollars, or $260, per catty, a traditional weight measure commonly used in markets here. Equal to just over one pound, one catty makes about 10 portions of soup, which works out to $26 a portion. Rapid economic growth across Asia in recent years has catapulted millions into the ranks of those who can now afford the dish.

In an effort to conserve shark populations, several nations have banned the fishing of sharks. Several American states, including California, have banned the possession, sale and distribution of shark fins. And in Hong Kong, several high-end restaurants and hotels have recently taken shark fin off the menu in response to shifting public awareness in the city. The Hong Kong government has so far resisted calls from shark conservationists to curtail the trade or consumption of shark fins. 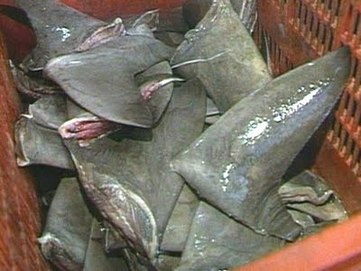 “The Hong Kong government has repeatedly dodged the question of implementing a banqueting ban on shark fin soup, saying that it sees no need for such guidelines,” said Mr. Cornish of W.W.F. “We strongly hope that the new administration in Hong Kong government will shortly follow suit.”

The Hong Kong Environmental Protection Department’s media office, in an e-mail on Tuesday, reiterated its long-held stance that the government carries out the Convention on International Trade in Endangered Species of Wild Fauna and Flora, known by its acronym, Cites.

Environmentalists, however, argue that Cites should list as threatened a far larger number of shark species than it does.

Hong Kong government guidelines stipulate that official banquets not be “extravagant,” and this means menus do not “generally include shark fin,” the media department added. It did not say whether Hong Kong would echo Beijing’s decision to ban the dish from official banquets. 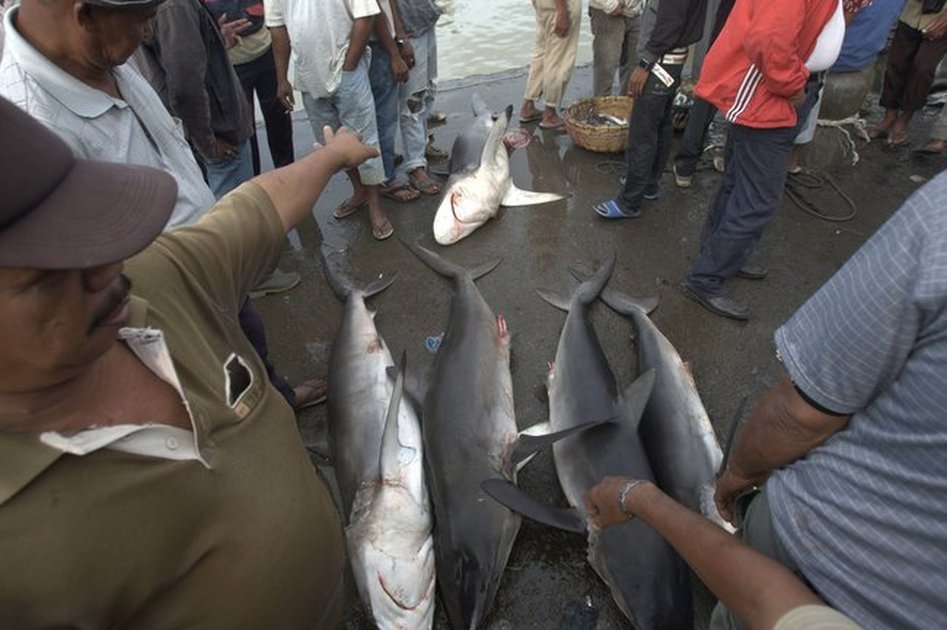 Fishermen displayed their sharks for sale at a market in Banda Aceh, Indonesia, in 2011. Rapid economic growth across Asia has increased the demand for shark fin soup.
The New York Times has reported that, in an apparent effort to help slow the decline of shark populations worldwide, China announced on Tuesday that all state functions will no longer serve Shark Fin Soup.

Whilst this is welcome news to those involved in Shark Conservation there have already been warnings that it could take up to 3 years to take effect - and even then regional areas of China are known to ignore central state orders so this announcement could end up being more symbolic in nature.