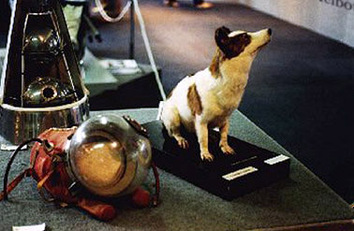 Beginning in the early 1950s, small female stray dogs were gathered from the streets of Moscow and taken to a nearby Russian research center for experiments in suborbital space flight. Dogs were chosen for these experiments because they were cheap and scientists felt they would be able to endure long periods of inactivity better than most other animals.

Females were chosen because they did not have to stand and lift a leg to urinate. The female dogs used in the "space race" experiments were trained to stay still for long periods of time (they spent 15-20 days at a time in small boxes) and wear such pieces of clothing as a pressurized suit and helmet.

From 1951 through 1952, nine unnamed dogs successfully flew suborbitally in R-1 series rockets. Three of these dogs flew two missions each. 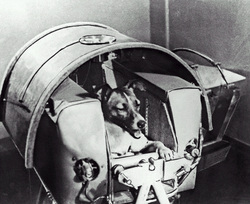 A dog named "Laika" was launched into space in Sputnik 2 on November 3, 1957. Laika, whose real name was Kudryavka (Little Curly), is often described as a "huskie-mix" but pictures show a small dog that looks very much like a fox terrier.

The fact that Laika weighed only 13 pounds supports a fox terrier taxonomy -- even the smallest of huskies would weight much more. American newspapers of the time called her "Muttnik". Laika was the first living creature ever to be launched into earth orbit, and Laika was the only animal Russian scientists knowingly sent into space to die. At the time there was no recovery method for true orbital flights.

At the World Space Congress in Houston in November of 2003, Dimitri Malashenkov of the Institute for Biological problems in Moscow finally revealed what happened to Laika. 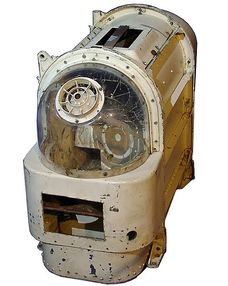 According to Malashenkov, medical sensors recorded that immediately after the launch, Laika's capsule reached speeds of nearly 18,000 miles per hour. As the pressure in the capsule increased, Laika's pulse rate increased to three times its normal level, presumably due to overheating, fear and stress. Five to seven hours into the flight, no further life signs were received from the dog.

In 1998, 79-year-old Oleg Gazenko, one of the lead scientists on the Soviet animals-in-space program, expressed his deep regrets during a Moscow news conference: "The more time passes, the more I'm sorry about it. We shouldn't have done it.... We did not learn enough from this mission to justify the death of the dog." 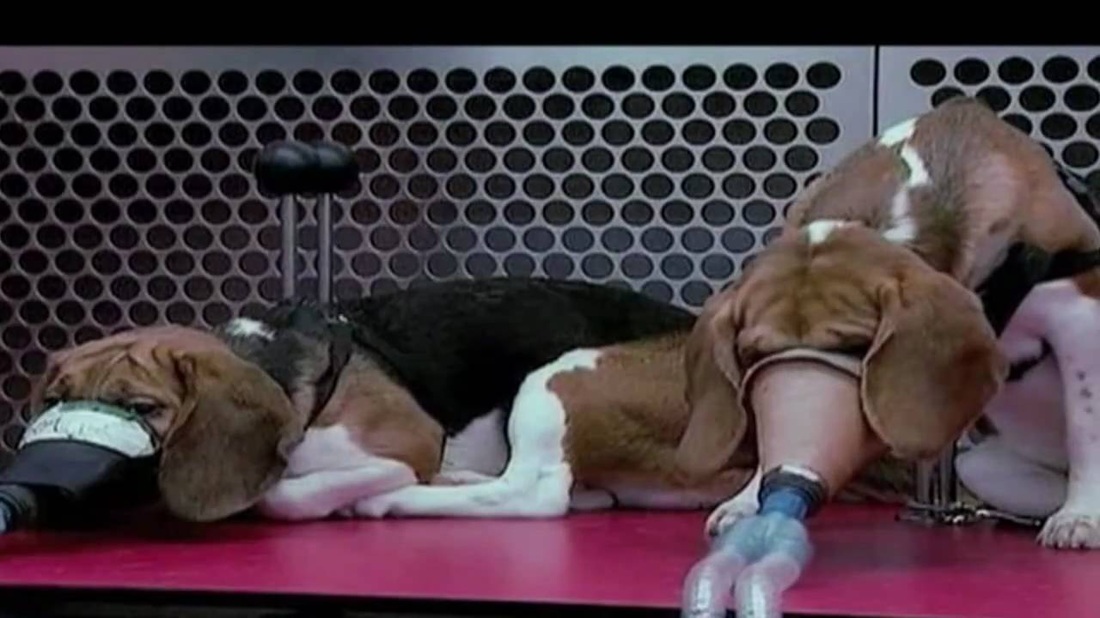 Dogs are widely used in biomedical research, testing, and education - particularly beagles, because they are gentle and easy to handle. The latest figures available (EU statistics) for animal experiments in the EU are for 2008, in which just over 12 million animals were used. The numbers reported are lower than national figures because countries do not have to report certain types of experiments such as those involving genetically modified (GM) animals. The 27 countries in the EU reported that in 2008 they used 21,315 dogs - source 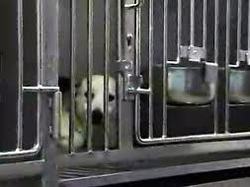 A Recipe for Cruelty For nearly 10 months in 2002 and early 2003, a PETA investigator worked undercover at Sinclair Research Center, a laboratory hired by Iams, and discovered a dark and sordid secret beneath the wholesome image of the dog- and cat-food manufacturer.

Dogs had gone crazy because they were confined to barren steel cages and cement cells, dogs were left piled on a filthy paint-chipped floor after chunks of muscle had been hacked from their thighs, dogs were surgically debarked, and horribly sick dogs and cats were neglected and left in cages to suffer without any veterinary care. 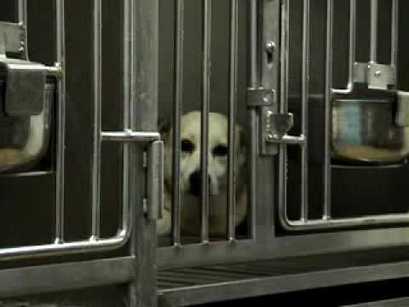 Footage shows that Iams representatives toured the facility and witnessed dogs who were circling in their cells and sweltering in the summer heat. Iams knew the truth yet did nothing to protect the animals.

The U.S. Department of Agriculture investigated PETA's complaint and agreed that the laboratory had failed to provide veterinary care and pain relief to suffering animals, failed to provide animals with adequate space, and failed to train employees—along with nearly 40 other violations of the federal Animal Welfare Act. Sinclair Research Center paid a penalty of $33,000 for its violations.

After intense pressure from PETA and its supporters, Iams agreed to make the following significant changes in its testing program: 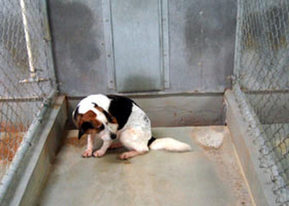 According to Iams, about 70 percent of the animals now in its tests reside at home with their families. In these studies, people volunteer their companion animals to participate in food and nutrition experiments from the comfort of their own homes.

The human guardians can easily be trained to feed the animals and properly collect fecal and urine samples for laboratory analysis to determine the quality of the animal's food. "In-home" studies have been shown to work and have strong scientific support, as shown by the successful PetSci program, which was developed by Dr. Charles Abramson and Dr. Timothy Bowser of Oklahoma State University.

Even so, Iams still keeps up to 700 dogs and cats in its Dayton, Ohio, laboratory for non-invasive nutritional studies. They claim that this laboratory provides a decent environment for the animals, but they refuse to allow a PETA representative to see inside.

Iams claims that some studies are too complex for in-home programs, but PETA urges Iams to collaborate with veterinary clinics for studies such as these. Veterinary clinics regularly see patients who suffer from ailments that a particular dog or cat food might help alleviate. 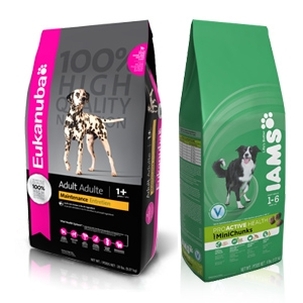 Iams has also refused to end invasive experiments on species other than dogs and cats. For one study, Iams gave Purdue University nearly $200,000 to conduct a two-year study in which experimenters taped the tails of mice to the tops of cages to keep their hind legs suspended in the air. This was done to cause muscular atrophy—the wasting away of muscle tissue. When PETA protested, the experiment was cut short.

Iams has also fought the release of information from a public university that had conducted a study funded by the company in which a painful disease was induced in dogs. What was Iams hiding?

Iams has made progress, but as an industry leader, it must send an even clearer message: No animal deserves the fate of those who remain in their laboratories. Safe, healthy cat and dog food does not require harming cats and dogs.

PETA continues to press Iams to ban conducting and funding invasive or terminal experiments on all species and to adopt 100 percent humane, non-invasive, and cage-free "in-home" testing, as many of Iams' compassionate competitors have done.

Until Iams agrees, we urge consumers to purchase dog and cat food from companies that do not test on animals. In the meantime, read about some other ways you can help the millions of animals every year who are abused and inadequately cared for?all in the name of research - Source

Cats are most commonly used in neurological research
In the 1960s and 1970s, at Harvard University in U.S, David Hubel and Torsten Wiesel’s experiments showed that if a kitten is deprived of normal visual experience during a critical period at the start of its life, the circuitry of the neurons in its visual cortex is irreversibly altered.  In each of a number of newborn kittens, one eyelid was sutured shut. The kitten was allowed to grow up that way, and when it reached adulthood (around 6 months), its eyelid was opened again.  Recordings were than made of the electrophysiological activity in each of the kitten’s eyes.  These recordings showed an abnormally low number of neurons reacting in the eye that had been sutured shut, and an abnormally high number in the other eye. Macroscopic observation of the visual cortex showed that the ocular dominance columns for the eye that had been left open had grown larger, while those for the eye that had been closed had shrunk.
Remarkably, Hubel and Wiesel also found that if the eye of an adult cat was sutured shut for a year, the responses of the cells in its visual cortex remain identical in all respects to those of a normal cat.  Later experiments showed that suturing a cat’s eye shut had no effect on its visual cortex unless this visual deprivation took place during the first three months of the cat’s life.
By recording the electrical activity of a cats nerve cells in the thalamus, a region of the brain that receives signals from the eyes, researchers from the University of California at Berkeley in 1999, were able to view these shapes. The team used what they describe as a "linear decoding technique" to convert the signals from the stimulated cells into visual images.

They recorded the output from 177 brain cells that responded to light and dark in the cat's field of view.

In total, the 177 cells were sensitive to a field of view of 6.4 by 6.4 degrees. As the brain cells were stimulated, an image of what the cat saw was reconstructed.

The first example is a face. Although the reconstructed image is rather fuzzy, it is clearly recognisable as a version of the original scene. It is possible that a clearer image could be obtained by sampling the electrical output of more cells.

In the cat's brain, as in ours, the signals from the thalamus cells undergo considerable signal processing in the higher regions of the brain that improve the quality of the image that is perceived.

Taking an image from a region of the brain before this image enhancement has taken place will result in a poorer image than the cat is able to see.


The other two examples show two woodland scenes, with tree trunks being the most prominent objects.

By being able to tap directly into the brain and extract a visual image the researchers have produced a "brain interface" that may one day allow the control of artificial organs and indeed machines by thought alone.

It is also conceivable that, given time, it will be possible to record what one person sees and "play it back" to someone else either as it is happening or at a later date.

Brain research Germany 1995 - Cats are used for research into stroke - A commercial high-resolution scanner designed for clinical PET studies was tested for its applicability to investigate cerebral metabolism and blood flow in cats.

In another six cats, hemodynamic and metabolic changes were followed by serial multi-tracer PET for 24 hr after permanent occlusion of the left middle cerebral artery (MCA).

Pattern and extent of changes of the physiological variables were related to the final infarct verified in matched histological sections.

Results - At spatial resolutions (FWHM) of 3.6 mm in transaxial planes and 4.0 mm axially, details of the gross anatomy of the cat brain were distinguished best in the FDG images. Cerebral blood flow, CMRO2 and CMRglc values measured in the cortex, white matter and basal ganglia were in the range of common autoradiographic results. Immediately after MCA occlusion, there was widespread decrease in blood flow, but metabolism was preserved at values, which suggest viable tissue. With time, the areas of increased oxygen extraction fraction (OEF) moved from the center to the periphery of the MCA territory.