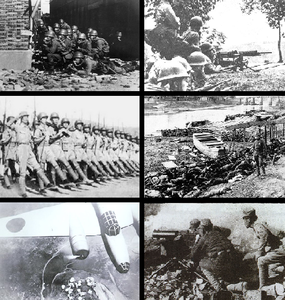 The Second Sino-Japanese War of 1937 expanded into part of World War II in 1941, which came to an end in 1945 following the atomic bombings of Hiroshima and Nagasaki and the Japanese surrender. Since adopting its revised constitution on May 3, 1947, during the occupation by the SCAP, Japan has maintained a unitary parliamentary constitutional monarchy with an Emperor and an elected legislature called the National Diet.

The country benefits from a highly skilled workforce and is among the most highly educated countries in the world, with one of the highest percentages of its citizens holding a tertiary education degree. Although Japan has officially renounced its right to declare war, it maintains a modern military with the world's eighth-largest military budget, used for self-defense and peacekeeping roles.

Japan is a developed country with a very high standard of living and Human Development Index. Its population enjoys the highest life expectancy and the third lowest infant mortality rate in the world. Japan is renowned for its historical and extensive cinema, rich cuisine and its major contributions to science and modern-day technology. 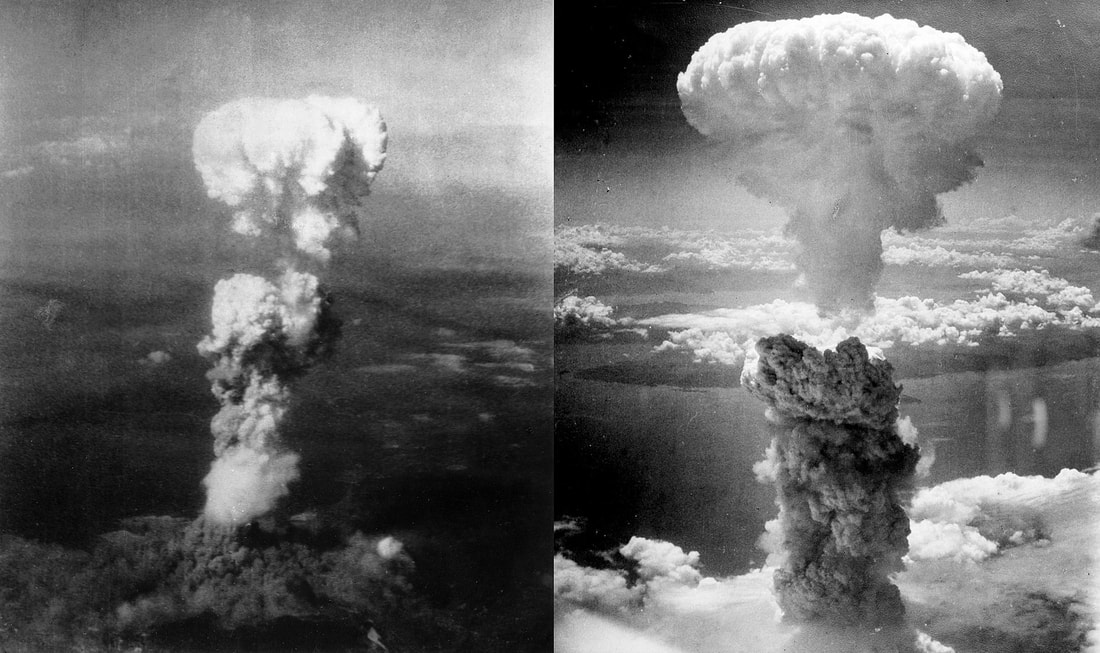 Japan has a total of 6,852 islands extending along the Pacific coast of East Asia. The country, including all of the islands it controls, lies between latitudes 24° and 46°N, and longitudes 122° and 146°E. The main islands, from north to south, are Hokkaido, Honshu, Shikoku and Kyushu.

The Ryukyu Islands, which include Okinawa, are a chain to the south of Kyushu. Together they are often known as the Japanese archipelago.

About 73 percent of Japan is forested, mountainous and unsuitable for agricultural, industrial or residential use. As a result, the habitable zones, mainly located in coastal areas, have extremely high population densities. Japan is one of the most densely populated countries in the world.

The islands of Japan are located in a volcanic zone on the Pacific Ring of Fire. They are primarily the result of large oceanic movements occurring over hundreds of millions of years from the mid-Silurian to the Pleistocene as a result of the subduction of the Philippine Sea Plate beneath the continental Amurian Plate and Okinawa Plate to the south, and subduction of the Pacific Plate under the Okhotsk Plate to the north.

The Boso Triple Junction off the coast of Japan is a triple junction where the North American Plate, the Pacific Plate and the Philippine Sea Plate meets. Japan was originally attached to the eastern coast of the Eurasian continent. The subducting plates pulled Japan eastward, opening the Sea of Japan around 15 million years ago.

Japan has 108 active volcanoes. During the twentieth century several new volcanoes emerged, including Shōwa-shinzan on Hokkaido and Myōjin-shō off the Bayonnaise Rocks in the Pacific. Destructive earthquakes, often resulting in tsunami, occur several times each century. The 1923 Tokyo earthquake killed over 140,000 people.

More recent major quakes are the 1995 Great Hanshin earthquake and the 2011 Tōhoku earthquake, a 9.1-magnitude quake which hit Japan on March 11, 2011, and triggered a large tsunami. Japan is substantially prone to earthquakes, tsunami and volcanoes due to its location along the Pacific Ring of Fire. It has the 15th highest natural disaster risk as measured in the 2013 World Risk Index. 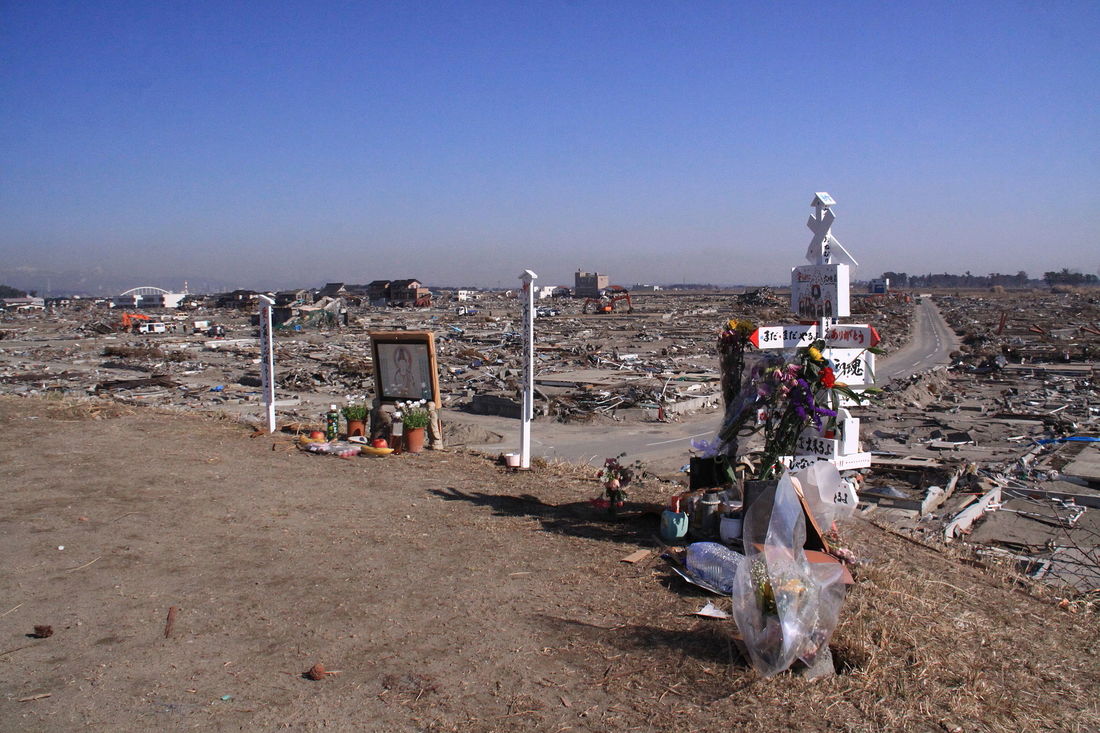 Climate
The climate of Japan is predominantly temperate, but varies greatly from north to south. Japan's geographical features divide it into six principal climatic zones: Hokkaido, Sea of Japan, Central Highland, Seto Inland Sea, Pacific Ocean, and Ryukyu Islands. The northernmost zone, Hokkaido, has a humid continental climate with long, cold winters and very warm to cool summers. Precipitation is not heavy, but the islands usually develop deep snowbanks in the winter.

In the Sea of Japan zone on Honshu's west coast, northwest winter winds bring heavy snowfall. In the summer, the region is cooler than the Pacific area, though it sometimes experiences extremely hot temperatures because of the foehn. The Central Highland has a typical inland humid continental climate, with large temperature differences between summer and winter seasons, as well as large diurnal variation; precipitation is light, though winters are usually snowy. The mountains of the Chūgoku and Shikoku regions shelter the Seto Inland Sea from seasonal winds, bringing mild weather year-round.

The Pacific coast features a humid subtropical climate that experiences milder winters with occasional snowfall and hot, humid summers because of the southeast seasonal wind. The Ryukyu Islands have a subtropical climate, with warm winters and hot summers. Precipitation is very heavy, especially during the rainy season.

The average winter temperature in Japan is 5.1 °C (41.2 °F) and the average summer temperature is 25.2 °C (77.4 °F). The highest temperature ever measured in Japan 41.0 °C (105.8 °F) was recorded on August 12, 2013. The main rainy season begins in early May in Okinawa, and the rain front gradually moves north until reaching Hokkaido in late July. In most of Honshu, the rainy season begins before the middle of June and lasts about six weeks. In late summer and early autumn, typhoons often bring heavy rain.

Japan has over 90,000 species of wildlife, including the brown bear, the Japanese macaque, the Japanese raccoon dog, the large Japanese field mouse, and the Japanese giant salamander. A large network of national parks has been established to protect important areas of flora and fauna as well as thirty-seven Ramsar wetland sites. Four sites have been inscribed on the UNESCO World Heritage List for their outstanding natural value. 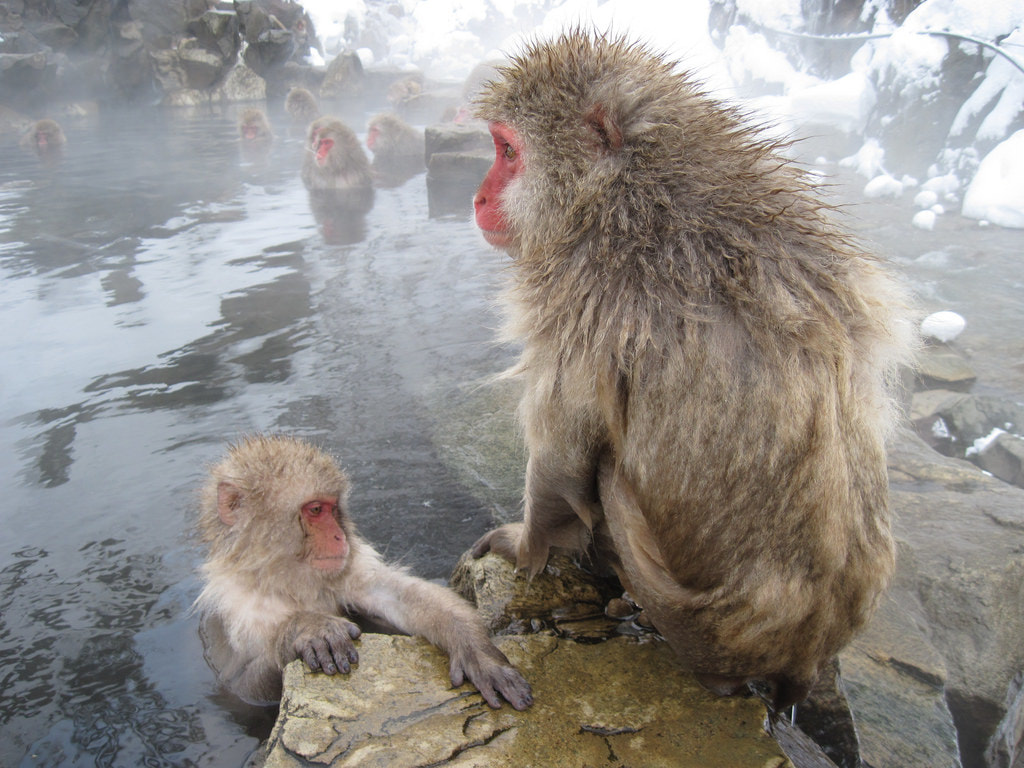