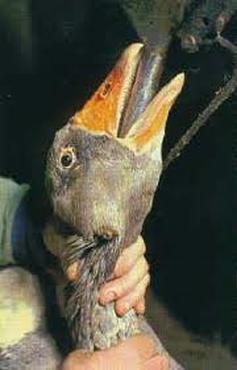 Foie gras; French for "fat liver" is a food product made of the liver of a duck or goose that has been specially fattened. By French law, foie gras is defined as the liver of a duck fattened by force feeding corn - Force-feeding is also known as gavage, from a French word meaning "to gorge".

Although outside of France it is occasionally produced using natural feeding. A pastry containing pâté de foie gras and bacon, or pâté de foie gras tout court, was formerly known as "Strasbourg pie" (or "Strasburg pie") in English on account of that city's being a major producer of foie gras.

Foie gras is a popular and well-known delicacy in French cuisine. Its flavor is described as rich, buttery, and delicate, unlike that of an ordinary duck or goose liver. Foie gras is sold whole, or is prepared into mousse, parfait, or pâté (the lowest quality), and may also be served as an accompaniment to another food item, such as steak. French law states that "Foie gras belongs to the protected cultural and gastronomical heritage of France" - French rural code L654-27-1.

Gavage-based foie gras production is controversial due to the force feeding procedure used. A number of countries and other jurisdictions have laws against force feeding or the sale of foie gras. 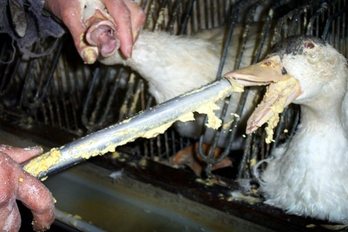 The production of foie gras - involves the controversial force-feeding of birds with more food than they would eat in the wild, and more than they would voluntarily eat domestically. The feed, usually corn boiled with fat (to facilitate ingestion), deposits large amounts of fat in the liver, thereby producing the buttery consistency sought by some gastronomes.

Animal rights and welfare activist groups such as the Humane Society of the United States and the Animal Legal Defense Fund contend that foie gras production methods, and force feeding in particular, consist of cruel and inhumane treatment of animals.

Specific complaints include livers swollen to many times their normal size, impaired liver function, expansion of the abdomen making it difficult for birds to walk, death if the force feeding is continued, and scarring of the esophagus. 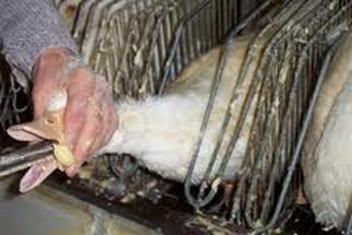 In modern gavage-based foie gras production, force feeding takes place 12–18 days before slaughter. PETA claims that the insertion and removal of the feeding tube scratches the throat and the esophagus, causing irritations and wounds and thus exposing the animal to risk of painful and mortal infections.

In 2001, the Director of the New York State Government Affairs & Public Policy Dept. for the American Society for the Prevention of Cruelty to Animals, which is one of America's leading environmental activist groups, wrote a letter to then NYS Attorney General, Eliot Spitzer, asking that the state's foie gras producers be prosecuted for violating animal cruelty statutes. 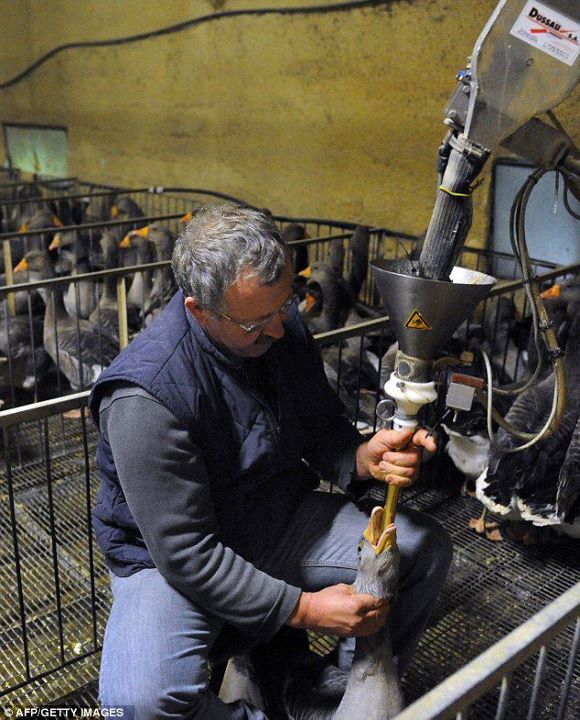 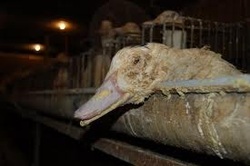 Late in 2003, the French group Stop Gavage ("Citizens' Initiative for the banning of force-feeding") published the Proclamation for the Abolition of Force Feeding, which asks justices to find foie gras production practices a violation of existing animal welfare laws.

For this manifesto - Stop Gavage - claims the support of over eighty French animal rights and welfare associations, over a hundred such associations from 25 other countries, and over 20 thousand individual signatories. 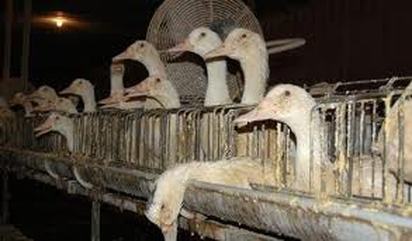 Stop Gavage, through its president Antoine Comiti, has criticized the INRA (a French public research institute) for allowing its researchers to receive grants from the foie gras industry for conducting research aimed at contradicting the EU report conclusions. Robert Dantzer, a retired INRA researcher, calls the INRA studies "pseudoscience" and "convenience research".

In 2005, the organisations APRL, IDA and PETA released a video narrated by Sir Roger Moore showing footage the groups took inside the three U.S. foie gras farms and several in France.

In 2012 a group of European MPs urged for a controversial EU-wide ban on the production and sale of foie gras, a process described by animal rights groups as "torture".

A group of European lawmakers, including a member from France’s Green Party, have joined animal rights campaigners in a bid to ban the production and sale of the French delicacy foie gras across the European Union. 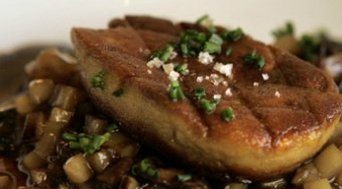 Animal Equality, a pressure group part of an international campaign to "raise awareness on the torture of thousands of ducks and geese on foie gras farms in five EU countries," welcomed the move by eight prominent MEPs that included the Green Party’s Yves Cochet.

"We want to help European consumers to open their eyes and ask the European Commission (for) a law to ban not only the production, but also the import and sale of foie gras," said Italian MEP Andrea Zanoni.

The MEPs' call for a ban followed a bid by French producers, backed by the country's junior minister for the food industry Guillaume Garot, to defend the gourmet food at the European parliament. 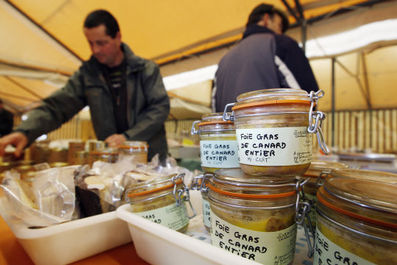 Important industry in France -  With some 35,000 people involved in foie gras production, the demand for a ban is unlikely to go down well in France.

French authorities were not amused when California set a precedent by becoming the first state to forbid the consumption of foie gras in July (2012) - Foie gras makers protest against California ban.

“Foie gras is an important part of the French gastronomic heritage and it has been recognised as such by UNESCO. There is no reason France should accept this state of affairs,” a French diplomat told Reuters at the time - French law states that "Foie gras belongs to the protected cultural and gastronomical heritage of France."

Currently, farming of animals to produce foie gras is banned in 22 EU nations - excluding Belgium, Bulgaria, France, Hungary and Spain - but not the import or sale of what campaigners dub as "torture in a tin".
Today, France is by far the largest producer and consumer of foie gras, though it is produced and consumed worldwide, particularly in other European nations, the United States, and China. 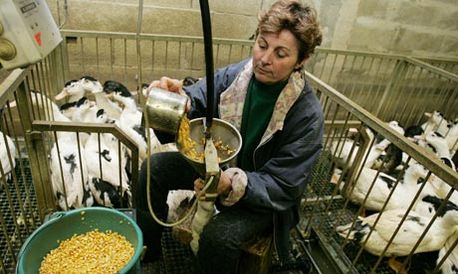 France is the leading producer and consumer of duck and goose foie gras. In 2005, the country produced 18,450 tonnes of foie gras (78.5% of the world's estimated total production of 23,500 tonnes) of which 96% was duck liver and the rest goose liver.

Total French consumption of foie gras was 19,000 tonnes in 2005. Approximately 30,000 people are members of the French foie gras industry, with 90% of them residing in the Périgord (Dordogne), the Midi-Pyrénées régions in the southwest, and Alsace. The European Union recognizes the foie gras produced according to traditional farming methods (label rouge) in southwestern France with a geographical indication of provenance.

Hungary is the world's second-largest foie gras (libamáj) producer and the largest exporter (1,920 tonnes in 2005). France is the principal market for Hungarian foie gras; mainly exported raw. Approximately 30,000 Hungarian goose farmers are dependent on the foie gras industry. French food companies spice, process, and cook the foie gras so it may be sold as a French product in its domestic and export markets.

Bulgaria produced 1,500 tons of foie gras in 2005; Canada also has a thriving foie gras industry. The demand for foie gras in the Far East is such that China has become a sizeable producer.

The report of the European Union's Scientific Committee on Animal Health and Animal Welfare on Welfare Aspects of the Production of Foie Gras in Ducks and Geese, adopted on December 16, 1998, is an 89-page review of studies from several producing countries. It examines several indicators of animal welfare, including physiological indicators, liver pathology, and mortality rate. It strongly concludes that "force feeding, as currently practised, is detrimental to the welfare of the birds."

Members of the committee describe how geese and ducks show "avoidance behaviour indicating aversion for the person who feeds them and the feeding procedure". Although the committee reported that there is no "conclusive" scientific evidence on the aversive nature of force feeding, and that evidence of injury is "small", in their overall recommendations, the committee stated that "the management and housing of the birds used for producing foie gras have a negative impact on their welfare". 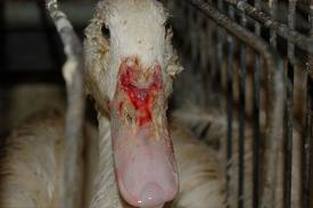 On physiology, the report finds that based on studies available, "no definite conclusions can be drawn concerning the physiological activity of birds in response to force feeding" because although "force feeding induced hepatic steatosis in the duck or goose", "hepatic steatosis in the waterfowl is a normal metabolic response" and there was a low incidence of disease indicating lesions.

If gavage is stopped the "return to normal took approximately four weeks". As an economic indicator the report states "it is strongly in the interest of the farmer" to avoid disease as the "resulting fat liver is of no commercial value".

It summarizes that "some pathologists consider this level of steatosis to be pathological but others do not" and recommends that research "should be carried out into methods of producing fat liver which do not require the use of force feeding".

The EU report notes that continued force feeding leads to early death of the animal, and the birds are typically slaughtered just at the point that mortality would drastically increase from the force feeding. In the studies it examined, "the mortality rate in force fed birds varies from 2% to 4% in the two week force feeding period compared with around 0.2% in comparable ducks". 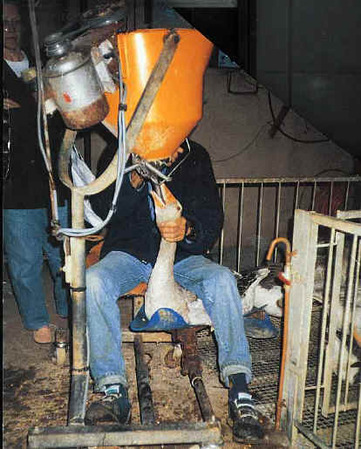 On the force feeding process, the EU committee examined several experiments carried out by INRA (Institut National de la Recherche Agronomique) to detect pain or distress by looking at blood hormones, and found that no definite conclusions can be drawn from these studies. Other studies looked at behavioral aversion to the feeding process and found that force fed ducks avoided the feeding pen when given a choice, whereas a majority of the control group not being force fed would enter the feeding pen voluntarily.

Daily hand-feeding of ducks and geese is normally associated with a positive response by the animals towards the person feeding them. In contrast, the working group observed that ducks and geese in a pen kept away from their force feeder when he entered the room. In an unpublished pilot experiment by INRA, ducks in cages reportedly displayed less avoidance behaviour to the force feeder’s visit than to the visit of a neutral person coming along the cages later. However, in the working group's own observations, "Ducks in cages had little opportunity to show avoidance but sometimes moved their heads away from the person who was about to force feed them."

The report also recommends collection of additional data regarding the health of the animals, feeding methods, animal housing, and socio-economic factors. 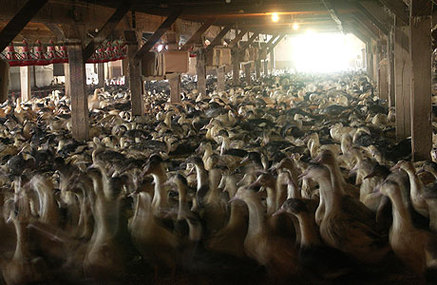 Europe "Until new scientific evidence on alternative methods and their welfare aspects is available", the production of foie gras is prohibited by treaty except for "where it is current practice" among 35 countries bound by the Council of Europe's European Convention for the Protection of Animals kept for Farming Purposes.

However, Foie gras can still be imported into and purchased in these countries. Most of these countries don't currently produce foie gras, nor have they been in the past. Thus, these bans have stopped actual foie gras production in very few countries. Turkey banned force feeding animals on June 24, 2004 when it enacted Animal Protection Law No. 1/323.

French law states that "Foie gras belongs to the protected cultural and gastronomical heritage of France." 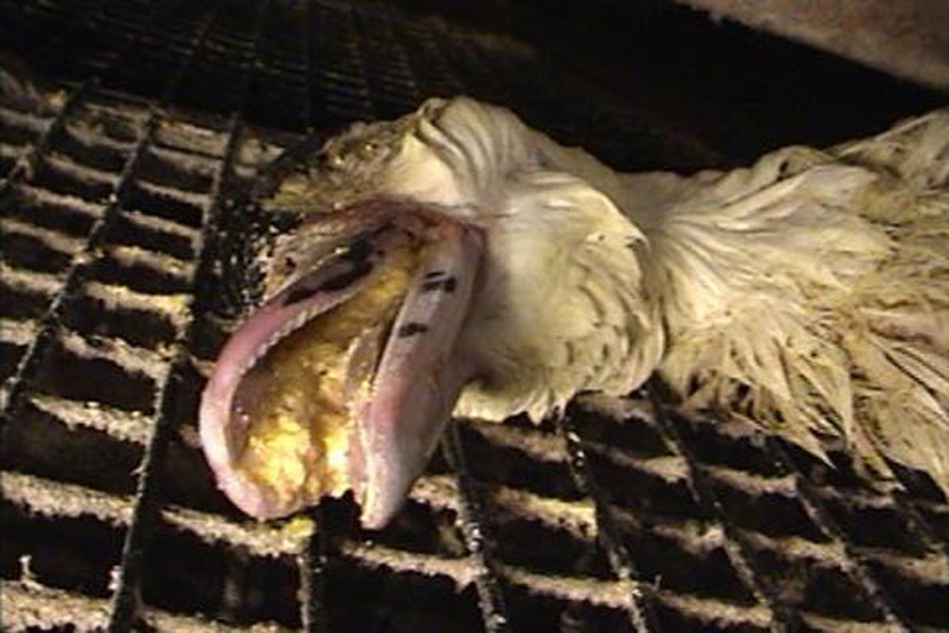 Foie gras, a totally unnecessary culinary nonsense that exists only for Gorme mouths and to keep running a cruel business to make money - the ordinary European citizen would not even notice if Foie gras was removed from the market - boycott Foie gras !