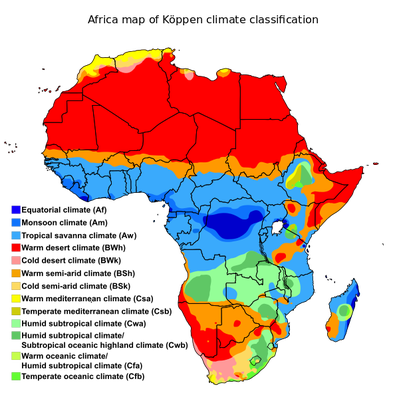 Africa is the world's second-largest and second-most-populous continent. At about 30.3 million km² (11.7 million square miles) including adjacent islands, it covers six per cent of Earth's total surface area and 20.4 per cent of its total land area. With 1.1 billion people as of 2013, it accounts for about 15% of the world's human population. The continent is surrounded by the Mediterranean Sea to the north, both the Suez Canal and the Red Sea along the Sinai Peninsula to the northeast, the Indian Ocean to the southeast, and the Atlantic Ocean to the west. The continent includes Madagascar and various archipelagos. It contains 54 fully recognized sovereign states (countries), nine territories and two de facto independent states with limited or no recognition.

Africa's population is the youngest amongst all the continents; the median age in 2012 was 19.7, when the worldwide median age was 30.4. Algeria is Africa's largest country by area, and Nigeria by population. Africa straddles the equator and encompasses numerous climate areas; it is the only continent to stretch from the northern temperate to southern temperate zones.

Africa hosts a large diversity of ethnicities, cultures and languages. In the late 19th century European countries colonized most of Africa. Most present states in Africa originate from a process of decolonization in the 20th century.
Prehistory
Africa is considered by most paleoanthropologists to be the oldest inhabited territory on Earth, with the human species originating from the continent. During the mid-20th century, anthropologists discovered many fossils and evidence of human occupation perhaps as early as 7 million years ago (BP=before present). Fossil remains of several species of early apelike humans thought to have evolved into modern man, such as Australopithecus afarensis (radiometrically dated to approximately 3.9–3.0 million years BP, Paranthropus boisei (c. 2.3–1.4 million years BP) and Homo ergaster (c. 1.9 million–600,000 years BP) have been discovered.
After the evolution of Homo sapiens sapiens approximately 150,000 to 100,000 years BP in Africa, the continent was mainly populated by groups of hunter-gatherers. These first modern humans left Africa and populated the rest of the globe during the Out of Africa II migration dated to approximately 50,000 years BP, exiting the continent either across Bab-el-Mandeb over the Red Sea, the Strait of Gibraltar in Morocco, or the Isthmus of Suez in Egypt
Early civilizations
At about 3300 BC, the historical record opens in Northern Africa with the rise of literacy in the Pharaonic civilization of Ancient Egypt. One of the world's earliest and longest-lasting civilizations, the Egyptian state continued, with varying levels of influence over other areas, until 343 BC. Egyptian influence reached deep into modern-day Libya and Nubia, and, according to Martin Bernal, as far north as Crete. An independent centre of civilization with trading links to Phoenicia was established by Phoenicians from Tyre on the north-west African coast at Carthage.

European exploration of Africa began with Ancient Greeks and Romans. In 332 BC, Alexander the Great was welcomed as a liberator in Persian-occupied Egypt. He founded Alexandria in Egypt, which would become the prosperous capital of the Ptolemaic dynasty after his death.
Following the conquest of North Africa's Mediterranean coastline by the Roman Empire, the area was integrated economically and culturally into the Roman system. Roman settlement occurred in modern Tunisia and elsewhere along the coast. The first Roman emperor native to North Africa was Septimius Severus, born in Leptis Magna in present-day Libya—his mother was Italian Roman and his father was Punic.

Christianity spread across these areas at an early date, from Judaea via Egypt and beyond the borders of the Roman world into Nubia; by AD 340 at the latest, it had become the state religion of the Aksumite Empire. Syro-Greek missionaries, who arrived by way of the Red Sea, were responsible for this theological development.

In the early 7th century, the newly formed Arabian Islamic Caliphate expanded into Egypt, and then into North Africa. In a short while, the local Berber elite had been integrated into Muslim Arab tribes. When the Umayyad capital Damascus fell in the 8th century, the Islamic centre of the Mediterranean shifted from Syria to Qayrawan in North Africa. Islamic North Africa had become diverse, and a hub for mystics, scholars, jurists, and philosophers. During the above-mentioned period, Islam spread to sub-Saharan Africa, mainly through trade routes and migration
Fauna
Africa boasts perhaps the world's largest combination of density and "range of freedom" of wild animal populations and diversity, with wild populations of large carnivores (such as lions, hyenas, and cheetahs) and herbivores (such as buffalo, elephants, camels, and giraffes) ranging freely on primarily open non-private plains. It is also home to a variety of "jungle" animals including snakes and primates and aquatic life such as crocodiles and amphibians. In addition, Africa has the largest number of megafauna species, as it was least affected by the extinction of the Pleistocene megafauna.

Ecology and biodiversity
Africa has over 3,000 protected areas, with 198 marine protected areas, 50 biosphere reserves, and 80 wetlands reserves. Significant habitat destruction, increases in human population and poaching are reducing Africa's biological diversity and arable land. Human encroachment, civil unrest and the introduction of non-native species threaten biodiversity in Africa. This has been exacerbated by administrative problems, inadequate personnel and funding problems.

Deforestation is affecting Africa at twice the world rate, according to the ﻿United Nations Environment Programme﻿ (UNEP). According to the University of Pennsylvania African Studies Center, 31% of Africa's pasture lands and 19% of its forests and woodlands are classified as degraded, and Africa is losing over four million hectares of forest per year, which is twice the average deforestation rate for the rest of the world.Some sources claim that approximately 90% of the original, virgin forests in West Africa have been destroyed. Over 90% of Madagascar's original forests have been destroyed since the arrival of humans 2000 years ago. About 65% of Africa's agricultural land suffers from soil degradation.
The African Union
The African Union (AU) is a 54-member federation consisting of all of Africa's states except Morocco. The union was formed, with Addis Ababa, Ethiopia, as its headquarters, on 26 June 2001. The union was officially established on 9 July 2002 as a successor to the Organisation of African Unity (OAU). In July 2004, the African Union's Pan-African Parliament (PAP) was relocated to Midrand, in South Africa, but the African Commission on Human and Peoples' Rights remained in Addis Ababa. There is a policy in effect to decentralize the African Federation's institutions so that they are shared by all the states.

The African Union, not to be confused with the AU Commission, is formed by the Constitutive Act of the African Union, which aims to transform the African Economic Community, a federated commonwealth, into a state under established international conventions. The African Union has a parliamentary government, known as the African Union Government, consisting of legislative, judicial and executive organs. It is led by the African Union President and Head of State, who is also the President of the Pan-African Parliament. A person becomes AU President by being elected to the PAP, and subsequently gaining majority support in the PAP. The powers and authority of the President of the African Parliament derive from the Constitutive Act and the Protocol of the Pan-African Parliament, as well as the inheritance of presidential authority stipulated by African treaties and by international treaties, including those subordinating the Secretary General of the OAU Secretariat (AU Commission) to the PAP. The government of the AU consists of all-union (federal), regional, state, and municipal authorities, as well as hundreds of institutions, that together manage the day-to-day affairs of the institution.
Political associations such as the African Union offer hope for greater co-operation and peace between the continent's many countries. Extensive human rights abuses still occur in several parts of Africa, often under the oversight of the state. Most of such violations occur for political reasons, often as a side effect of civil war. Countries where major human rights violations have been reported in recent times include the Democratic Republic of the Congo, Sierra Leone, Liberia, Sudan, Zimbabwe, and Côte d'Ivoire.
Culture
Some aspects of traditional African cultures have become less practised in recent years as a result of neglect and suppression by colonial and post-colonial regimes. For example, African customs were discouraged, and African languages were prohibited in mission schools. Leopold II of Belgium attempted to "civilize" Africans by discouraging polygamy and witchcraft.

Obidoh Freeborn posits that colonialism is one element that has created the character of modern African art. According to authors Douglas Fraser and Herbert M. Cole, "The precipitous alterations in the power structure wrought by colonialism were quickly followed by drastic iconographic changes in the art." Fraser and Cole assert that, in Igboland, some art objects "lack the vigor and careful craftsmanship of the earlier art objects that served traditional functions. Author Chika Okeke-Agulu states that "the racist infrastructure of British imperial enterprise forced upon the political and cultural guardians of empire a denial and suppression of an emergent sovereign Africa and modernist art."

In Soweto, the West Rand Administrative Board established a Cultural Section to collect, read, and review scripts before performances could occur. Editors F. Abiola Irele and Simon Gikandi comment that the current identity of African literature had its genesis in the "traumatic encounter between Africa and Europe." On the other hand, Mhoze Chikowero believes that Africans deployed music, dance, spirituality, and other performative cultures to (re)asset themselves as active agents and indigenous intellectuals, to unmake their colonial marginalization and reshape their own destinies."

There is now a resurgence in the attempts to rediscover and revalue African traditional cultures, under such movements as the African Renaissance, led by Thabo Mbeki, Afrocentrism, led by a group of scholars, including Molefi Asante, as well as the increasing recognition of traditional spiritualism through decriminalization of Vodou and other forms of spirituality.
Religion
Africans profess a wide variety of religious beliefs, and statistics on religious affiliation are difficult to come by since they are often a sensitive a topic for governments with mixed religious populations. According to the World Book Encyclopedia, Islam is the largest religion in Africa, followed by Christianity. According to Encyclopedia Britannica, 45% of the population are Christians, 40% are Muslims, and 10% follow traditional religions. A small number of Africans are Hindu, Buddhist, Confucianist, Baha'i, or have beliefs from the Judaic tradition. There is also a minority of Africans who are irreligious. - Source