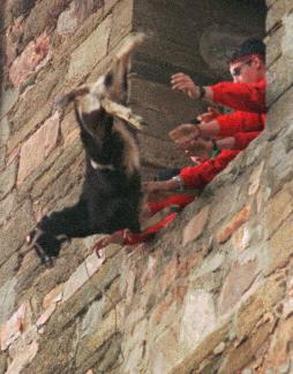 Saints are highly revered and celebrated throughout Spain in special days of “fiesta” – Saints Days. Some saints are celebrated nationally in Spain and others are legends and celebrated only in particular villages. In the city of Zamora, Saint Vincent has been honoured with his very own festival and Saint´s Day at which a very peculiar (and controversial) custom kicks off the annual fiesta.

The tiny village of Manganeses de la Polvorosa, in northwestern Spain, holds its annual festival for their towns patron Saint Vincent every June. The festivity begins with a group of excited young men tossing a live goat off the top of a 50-foot church belfry to the crowd below who catch the flying goat with a canvas sheet.

The goat is then paraded through the streets on the shoulders of partygoers and thus begins the annual San Vicente de Martir festival! Hundreds of people, many in traditional dress, descend upon this sleepy village to witness this unusual spectacle.

As to when and how this began, no one can actually confirm. Although, each villager is absolutely sure that their rendition of the story behind this tradition is true and undisputable.
There are quite a few legends and stories as to how this curious custom originated. One version claims that this custom began in the 18th century (others say hundreds of years ago and others as little as 20 years ago) when a priest donated his goats milk to a needy family and shortly after the goat fell from the church bell tower but was miraculously saved by the poor villagers who caught the goat in a blanket.

A different local legend says the festival was born when a wily goat snuck up the steps of the 18th century church to eat food the village priest had left for doves. When the priest discovered the goat, it became frightened and it leapt from the belfry. Surviving the great fall and landing on its hooves, the goat quickly recovered and disappeared into the woods leaving a very shocked Saint Vincent watching from above.

However, as each year the (not so lucky) chosen goat is hurled from the bell tower into the tarpaulins below, some survive the fall and some do not. Not much attention is given to the death of this animal, it is set aside and the fiesta begins regardless. If the goat survives it is revered and is paraded through the small village, becoming a local legend for years to come.

This custom is not very well perceived of by outsiders, causing much controversy and outrage by animal activists. They consider this inhumane animal treatment and demand the termination of this tradition.

Many organizations have rallied to abolish this annual custom, or at least have it modified. Through the years modifications such as “lowering” the goat safely, launching an inanimate object (instead of a live one) below and in 1992 officials have even gone as far as cancelling this tradition and (unsuccessfully) attempting to fine rebellious participants.

However, townspeople do not take kindly to outsiders and officials meddling with their fiesta, many villagers retaliated by attacking police and inquisitive journalists. To date the people of Manganeses de la Polvorosa show no signs of relenting and giving up this age old tradition.

Many villagers argue that the goats “don´t suffer at all and are only shaken up afterwards”. It is the responsibility of those who have recently turned 18 to organise the festival and are the ones who actually catapult the goat from the church bell tower. Therefore, too many the fiesta is considered a celebration of the coming of adulthood in the village.

The Vicente de Martir festival may be controversial, the villagers and outsiders may continue to clash about the future of this tradition, but for now it continues and the villagers celebrate with pride and enthusiasm Saint Vincent’s Day. The law prohibiting goat throwing in Spain are not followed.

They still do it, but: The councilors of Manganeses, said the town will not take responsibility for the "behaviors of the Participants in the spectacle." Village residents will continue with this even though the city says otherwise. Slack, as usual in Spain, where they do as they want to celebrate about religious nonsense. Source & source