In memory of Vučko 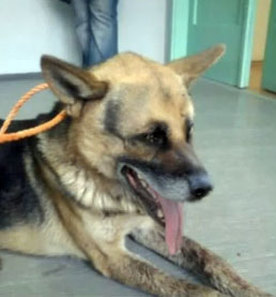 The firework caused horrific injuries to the dog’s face, but did not kill him. He wandered about for five days before being finally rescued by animal welfare volunteers who took him to a veterinarian’s office.

The firework shell was still embedded in the dog’s head, and maggots had started to eat his ruined flesh. The vets determined his injuries could not be helped and he was euthanized.

This image is how Vučko might have looked. It is not real, it is a reconstruction by Victoria Rider Galietta.

Acts of cruelty against dogs and cats are common in Bosnia-Herzegovina, a country struggling to rebuild itself since the 1992 civil war. Up until 2009 no animal protection laws existed. Since then, authorities not consistently applied these laws.

Their indifference to the problem reinforces a public perception that animals do not matter. With a burgeoning stray cat and dog problem, reports of animal cruelty, dog hunts, poisonings, dumping of animals, are still commonplace.

There are many hundreds who are starving or hurt or abused, and many freeze to death in the cold winters. There are no government or society-funded animal protection programmes, no adequately funded or equipped animal shelters, no RSPCA or ASPCA organisations.

Thus the situation for stray animals in this country is dire. What happened to Vučko is happening to others, and worse.

Source: In memory of Vučko
Please be warned - pictures are extremely distressing.

Video showing Vucko being checked by the veterinary surgeons.