Apr 24, 2013 - Overcrowding on farms around Shanghai was the underlying factor that led to 16,000 dead pigs floating down the Huangpu river into China's affluent financial centre, according to an analysis of official documents and interviews with farmers in the region.
The appearance last month of carcasses of rotting hogs in a river that supplies tap water to the eastern Chinese city was a morbid reminder of the pressures facing China's mostly small-scale farmers as the country grapples with food safety scares, environmental pressures and, most recently, a bird flu outbreak.

Until now the main reason for Shanghai's startling outbreak of dead hogs appeared to have been a local government crackdown on criminal gangs that had been selling abandoned carcasses as meat on the black market, meaning fewer ended up in the river.
But a deeper look suggests that an unsustainable level of overcrowding -- a key factor in the spread of disease and death rates -- was the critical issue. Experts warn that if conditions are not improved the incident may not have been a one-off.

"We can't let things go on the way they are or it won't just be the 10,000 or so pigs in the river this year, we'll see more in the coming years," said Xu Yafeng, CEO of NX28, a specialist web platform for agricultural information. 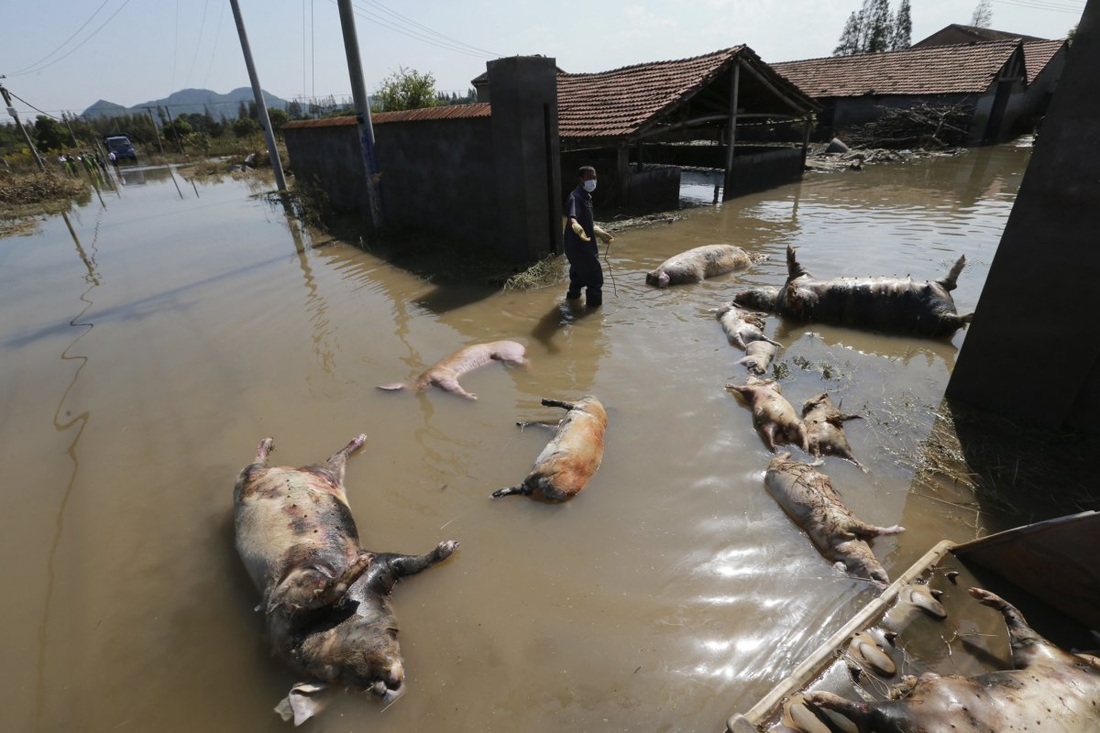 In an acknowledgement of the problem, officials launched a plan late last year to slash the number of pigs in the region -- a drive that may have made things worse in the short-term by cutting the amount of land available for farming before there was a corresponding reduction in livestock.The number of pigs in Jiaxing, a city just to the west of Shanghai identified as the main source of the dead pigs, more than doubled over the last two decades. It hit 7.5 million in 2012, even as the local government cut the amount of land available for farmers.

This overcrowding of pigs led to the city-wide plan to cut hog numbers to below 2 million within just two years. "the winter to this spring, the trend of dead pigs has been particularly serious," Wang Xianjun, a local environmental official, told the Jiaxing Daily in March. "We keep digging more pits to deal with the dead pigs, but if it carries on like this, they won't be able to take them." Wang's words proved prophetic. Just four days later, the first reports emerged of pigs drifting down the Huangpu.
Local officials contacted by Reuters declined to comment. 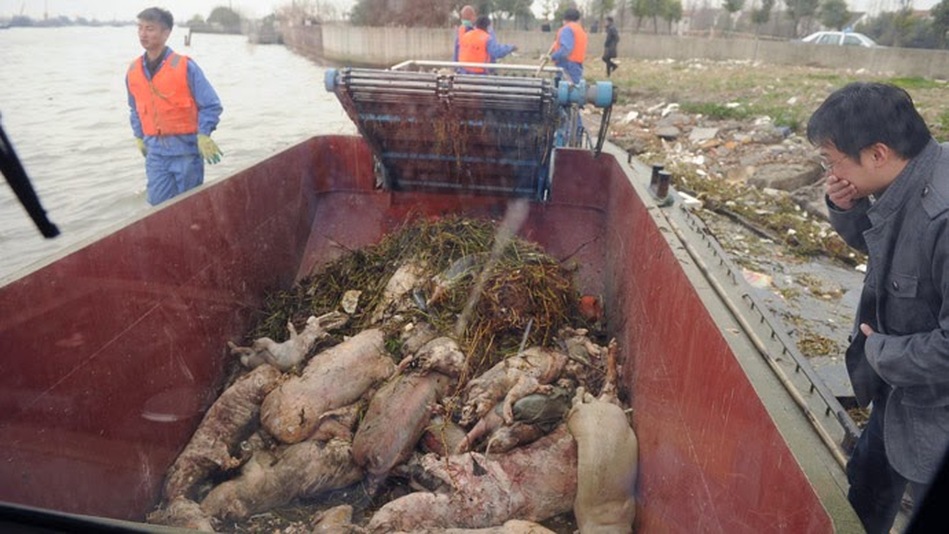 FARMING BOOM
China's booming demand for meat has the potential to create ever more crowded farms, ripe for the spread of disease. Pork demand is expected to grow around 20 percent from 2012 levels to 60 million tons by 2020, according to a recent Rabobank report.

The number of small hog farmers around Jiaxing climbed over the last few years as pork prices surged, resulting in far too many pigs for the land available.

Data from a Nanhu district government document in September shows in 2011 the key hog farming town of Xinfeng had a level of 15.3 pigs per mu (667 sq meters), three times higher than the level of five hogs per mu local officials recommended in August 2012. The nearby village of Fengqiao had levels of 10 hog per mu.

"Disease and mortality rates among the pigs have got worse every year," said one woman in the farming area of Henggang on the outskirts of Jiaxing. "In some areas this year mortality rates were probably as high as 30 percent."
The normal mortality rate for pigs in China is around 3 to 5 percent, Fang Yan, the deputy head of the rural department of China's state planning bureau, told a news conference in Beijing.

The high density of pig farms, and the poor farm management that is often associated with small-scale farming operations, are key risk factors for porcine circovirus -- a common disease among pigs that is the most likely killer of the floating hogs -- according to many academic and scientific papers. Since 2012, however, oversupply has driven pork prices down sharply. Between the end of January and mid-March this year, prices tumbled 16.2 percent.

This had a further impact on disease and mortality rates --when prices are weak, farmers tend to take less care of their livestock, said Tao Shi, a Shanghai-based expert on hog farming. Increasingly aware of the urgency of the issue, the Jiaxing government launched its plan last September to reduce the number of hogs by two-thirds and to slash the amount of land available for farming by around 40 percent. 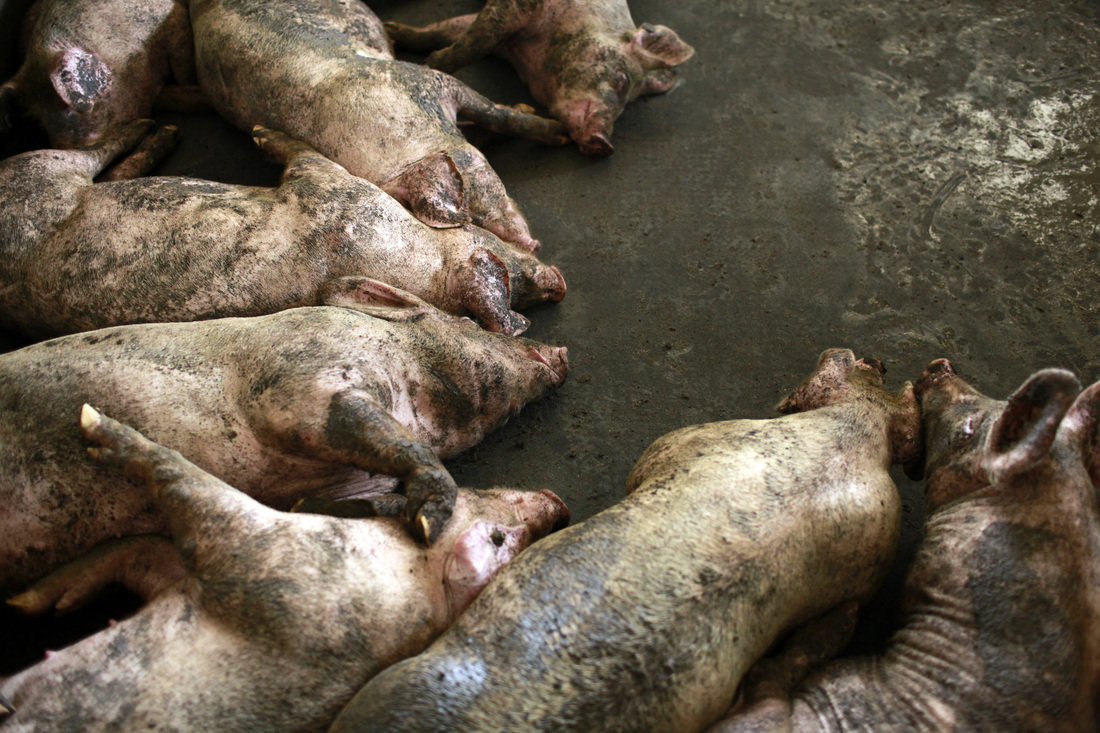 "DESTROY THE PIG PENS"
Since the carcasses were discovered in the Huangpu, the response has accelerated. A visit to several farming districts around Jiaxing revealed empty sties, which locals said had been recently vacated for demolition.
Three local women in Henggang told Reuters that pig farmers were being given financial incentives to abandon the land, while one official sign, recently painted on the wall of a nearby factory, read: "Destroy the pig pens, lead a happy life."

Many farmers are not happy. One 40-year-old said he has been ordered to close down his farm, while another farmer Reuters interviewed was in the middle of selling his pigs at a loss of 150 yuan ($24) per head after being told his farm contravened the regulations. Neither wanted their names used. "They can't just do it this way and wipe us out so fast," the farmer said, as all but one of his pigs were taken away in two crowded trucks over the space of 30 minutes.

The surge of dead pigs demonstrates the wider pressures China's farmers now confront. Limited land access, falling pork prices, tighter profit margins and the rapid spread of urbanization forces some farmers off the land entirely. Others are pushed to farm in ever more crowded conditions. Many Chinese pig farmers use medicated feed containing antibiotics to help stave off disease, but cost pressures have led some to cut back on expensive vaccines in favor of giving medication later when illness strikes. Others skirt incineration costs by dumping livestock.

David Mahon, Beijing-based managing director of Mahon China Investment Management said the pressure on farmers' margins was huge, which could lead to some farmers cutting corners. "If you push (farmers) to this point, they'll do anything to save costs." ($1 = 6.1791 Chinese yuan). Source: Reuters 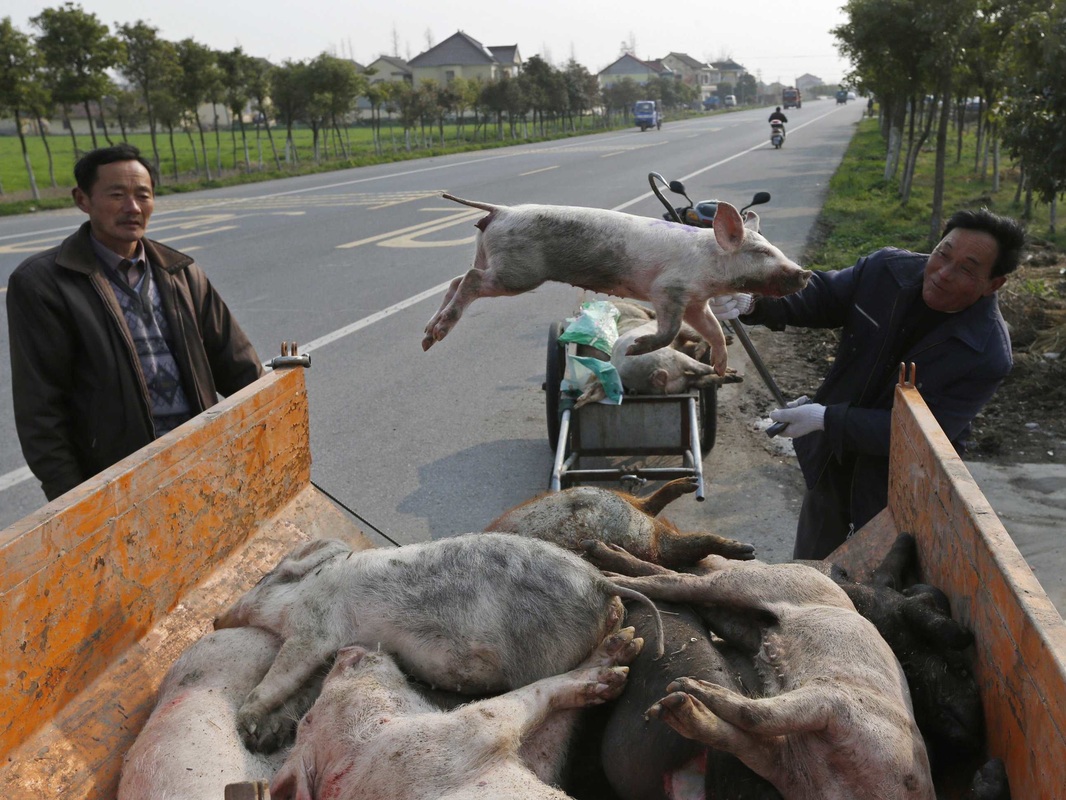 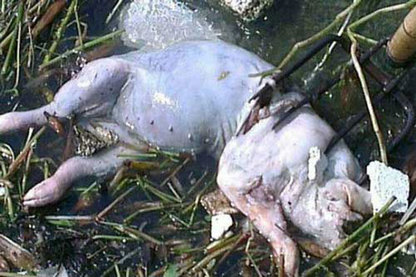 17 April 2014 -  At least 170 dead pigs have been found in a river in northwest China according to state media, the latest food and water safety incident to hit the country.The pigs were found in a tributary of the Yellow River, China's second longest river, in Qinghai Province by local residents last week but it was not yet known where the pigs came from and what killed them.

According to the state news agency, Xinhua, the pigs tested negative for an infectious disease. The center of animal disease control and prevention said it will carry out further tests. The pigs were found in a section of the Huangshui River which is a major source of water for irrigation for the surrounding regions.

There have been a number of incidents where dead pigs have been found floating in Chinese rivers. Last month, over 150 pig carcasses were found in the Gan River, a tributary of the Yangtze River, in Jiangxi province. And Chinese state media reported in March that nearly 500 dead pigs have been removed from a reservoir in Sichuan province every month. 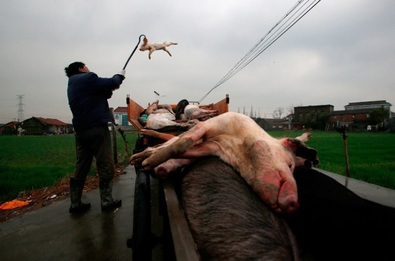 The biggest dead pig scandal took place last March when 16,000 dead pigs were found floating in the Huangpu River in Shanghai which supplies drinking water to many of the city's 26 million residents, leading to concerns about water and food safety in the city.

Grim photos of the city's sanitation works pulling bloated decomposing pig carcasses out of the river circulated online and in the media.

It is not always easy to find where the dead pigs come from or their cause of death. However, it is thought that farmers frequently dump pigs that have died into rivers to avoid paying for them to disposed of properly.

There has also been a crackdown in recent years on the illegal sale of dead or sick pigs for processing and it is believed that because of this, farmers are instead resorting to dumping dead pigs into rivers.

Meanwhile, authorities in the city of Lanzhou in Gansu province have said the city is to get a second water supply after excessive levels of the chemical benzene was found in the tap water. The city's more than 3 million residents were warned not to drink tap water after levels of the carcinogenic chemical were found to be more than 20 times above national safety levels. Since early last month, the city's residents had reported of a bad smelling from the water coming from taps. Source: The Guardian 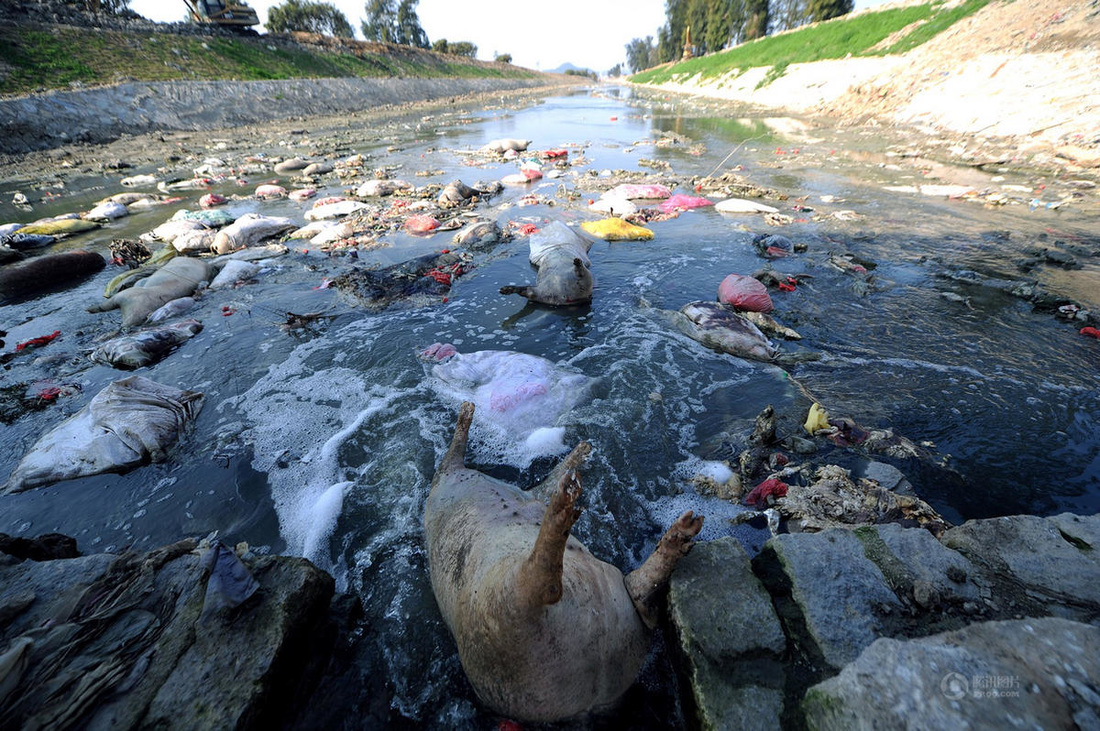 China investigates as truckloads of dead deformed pigs are dumped in rivers that supply drinking water to villages
17 March 2015 - Chinese authorities are investigating after a spate of incidents in which scores of dead animals, mostly pigs, were dumped in rivers.In one incident, in Fuijan province, the rotting corpses were only discovered when villagers complained that their drinking water tasted strange.

Horrified sanitation workers discovered the rotting corpses of 55 pigs, geese and sheep after locals complained about the taste of their water in the village of Jinli in south-eastern China.

Last week, around 50 dead pigs were seen floating in filth on Wulong river, a sidestream of the Yangtze river, reported The People's Daily Online. Most of the pigs were highly decomposed. Local authorities in Yichang city, Hubei province, in Central China, are investigating the incident.

And on March 10, more than 50 dead pigs were seen floating on Lingwang Stream in Luo Yang Town in Hui’an County, Guangdong Province, in the south of the country.  Locals said the rotting corpses were responsible for an 'intolerable smell' and that they had polluted the water nearby. Authorities rushed to clean up the scene and buried all the dead animals. 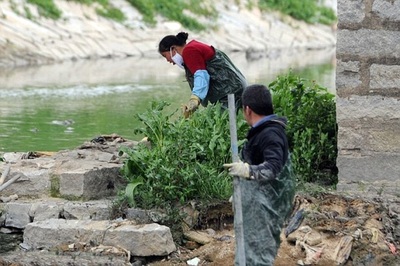 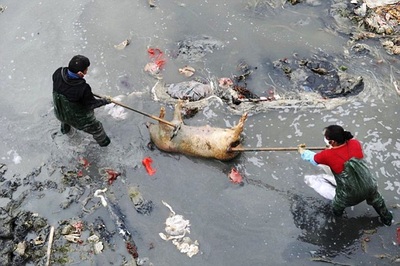 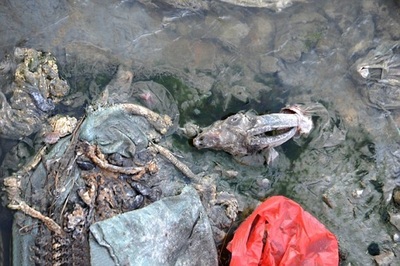 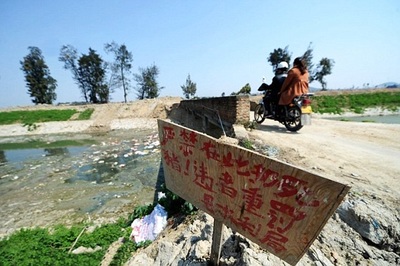 In Jinli, villager Shuang Hsu, 59, said: 'We began to notice our water was tasting a bit strange but we had no idea it was because of this. 'When we found out we were absolutely sickened. The water from the river runs directly to our village and is our main source of water.'

Medics were called in to test the villagers' drinking water for contamination and the locals for any signs of sickness. No signs of illness have been found yet. A spokesman for the sanitation department said: 'When officers arrived at the river, they were greeted with a horrific sight and smell.

'Most of the animals seem to have been either been born with deformities and were killed by the farmers or had contracted illnesses and were then killed. 'They were all dumped here.

'The proper disposal of dead animals usually involves burying them en masse underground to prevent the spread of disease or contamination of important water sources. 'These farmers are in flagrant abuse of the rules and are endangering lives.'
Police say they are now looking for the farmers involved.

A police spokesman said: 'The communities around here are fairly small so there is only a certain number of suspects. When we have found them, they will be heavily fined. Source: Dailymail 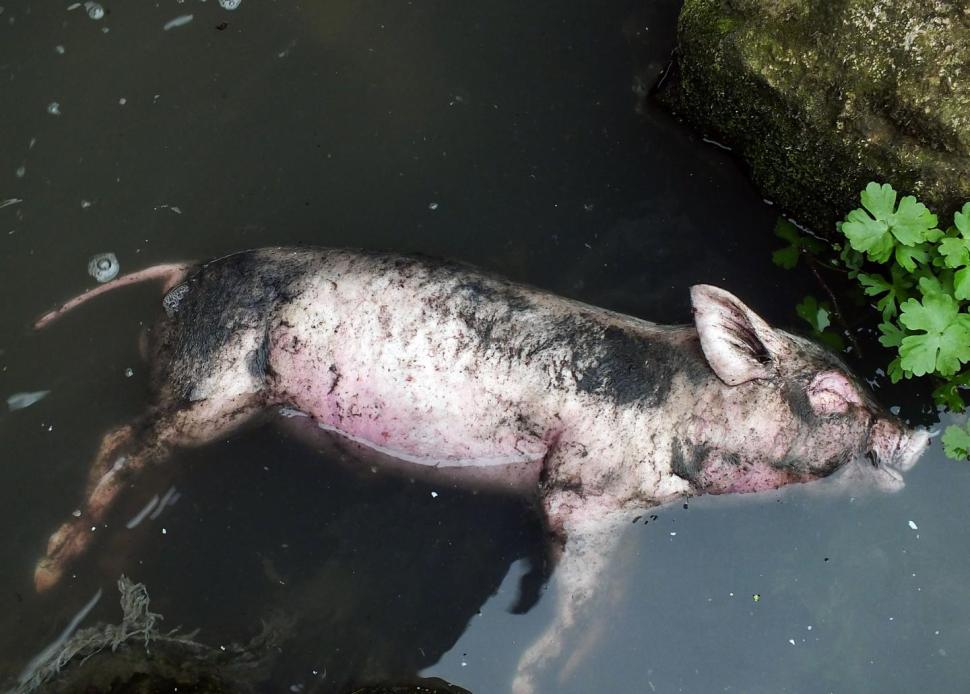