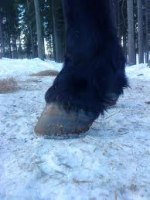 The donkey or ass, Equus africanus asinus, is a domesticated member of the Equidae or horse family. The wild ancestor of the donkey is the African Wild Ass, E. africanus. In the western United States, a small donkey is sometimes called a burro (from the Spanish word for the animal). A male donkey or ass is called a jack, a female a jenny, and offspring less than one year old, a foal (male: colt, female filly).

The name Jack was so common at one point that it was used for addressing any male. It was eventually used to designate any male person, male animals, and even a variety of inanimate objects, such as a jack for lifting heavy loads. Hence the names lumberjack, jackass, jackrabbit, bootjack, jack-of-all-trades, and even Jack the Ripper.

A little more confusing is how the female donkey became known as the jenny ass. Nowadays Jenny is short for Jennifer, but there were few Jennifers hundreds of years ago when “Jenny ass” became Jack’s counterpart. It turns out that, back then, the name Jenny was also short for Guinevere, an extremely common English name for girls hundreds of years ago.

While different species of the Equidae family can interbreed, offspring are almost always sterile. Nonetheless, horse/donkey hybrids are popular for their durability and vigor. A mule is the offspring of a jack (male donkey) and a mare (female horse). The much rarer successful mating of a male horse and a female donkey produces a hinny.

Asses were first domesticated around 3000 BC, approximately the same time as the horse, and have spread around the world.They continue to fill important roles in many places today and domesticated species are increasing in numbers, but the African wild ass and another relative, the Onager, are endangered. As "beasts of burden" and companions, asses and donkeys have worked together with humans for millennia. 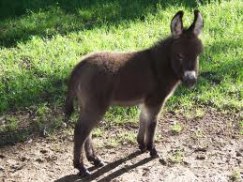 Donkeys have a notorious reputation for stubbornness, but this has been attributed to a much stronger sense of "self preservation" than exhibited by horses.

Likely based on a stronger prey instinct and a weaker connection with man, it is considerably more difficult to force or frighten a donkey into doing something it perceives to be dangerous for whatever reason.

Although formal studies of their behaviour and cognition are rather limited, donkeys appear to be quite intelligent, cautious, friendly, playful, and eager to learn.

They are often pastured or stabled with horses and ponies, and are thought to have a calming effect on nervous horses. If a donkey is introduced to a mare and foal, the foal will often turn to the donkey for support after it has been weaned from its mother. 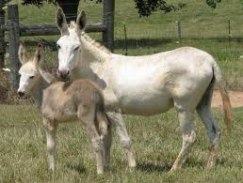 There are about 44 million donkeys today. China has the most with 11 million, followed by Pakistan, Ethiopia and Mexico. Some researchers believe the actual number is somewhat higher since many donkeys go uncounted.


The number of donkeys in the world continues to grow, as it has steadily throughout most of history.

Some factors contributing to this are increasing human population, progress in economic development and social stability in some poorer nations, conversion of forests to farm and range land, rising prices of motor vehicles and fuel, and donkeys' popularity as pets.

In prosperous countries, the welfare of donkeys both at home and abroad has recently become a concern, and a number of sanctuaries for retired and rescued donkeys have been set up.

The largest is the Donkey Sanctuary of England, which also supports donkey welfare projects in Egypt, Ethiopia, India, Kenya, and Mexico - Source 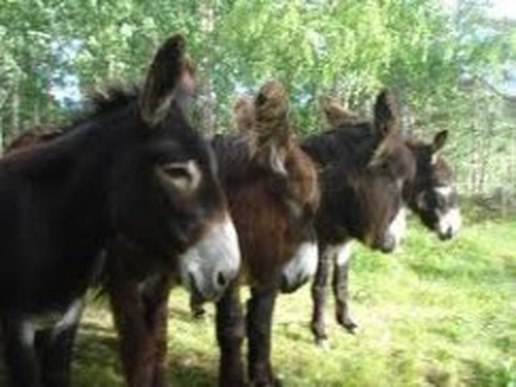 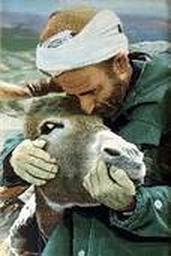 Once a person has earned their confidence they can be willing and companion-able partners and very dependable in work.

For this reason, they are now commonly kept as pets in countries where their use as beasts of burden has disappeared.

Donkey rides for children are also a popular pastime for children in holiday resorts or other leisure contexts.

The vast majority of donkeys are used for the same types of work that they have been doing for 6000 years. Their most common role is for transport, whether riding, pack transport, or pulling carts. They may also be used for farm tillage, threshing, raising water, milling, and other jobs. Other donkeys are used to sire mules, as companions for horses, to guard sheep, and as pets. A few are milked or raised for meat.