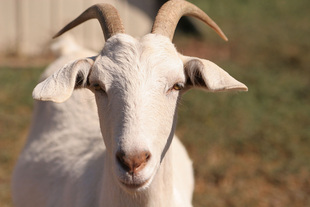 Goat meat - is the meat of the domestic goat (Capra aegagrus hircus). It is often called chevon or mutton when the meat comes from adults, and cabrito or kid when from young animals. While "goat" is usually the name for the meat found in common parlance, producers and marketers may prefer to use the French-derived word chevon (from chèvre), since market research in the United States suggests that "chevon" is more palatable to consumers than "goat meat".

Cabrito, a word of Spanish origin, refers specifically to young, milk-fed goat. In the English-speaking islands of the Caribbean, and in some parts of Asia, particularly Bangladesh, Nepal, Sri Lanka, Pakistan and India, the word “mutton” is often used colloquially to describe both goat and lamb meat, despite technically only referring to sheep meat.

Although cited in a New York Times article as "the most widely-consumed meat in the world",[2] in total consumption goat is a distant fourth globally behind pork, beef, and chicken. Goat is a staple of Africa, Asia and South/Central America, and a delicacy in a few European cuisines. The cuisines best known for their use of goat include Middle Eastern, North African, Indian, Mexican, and Caribbean. 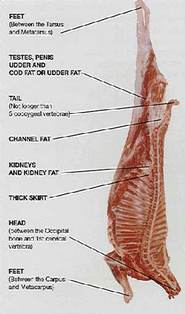 Goat has historically been less commonplace in American, Canadian and Northern European cuisines, but is finding a hold in some niche markets. While in the past goat meat in the West was confined to ethnic markets, it can now be found in a few upscale restaurants and purveyors, especially in cities such as New York and San Francisco. Bill Niman of Niman Ranch has recently turned to raising goats and he, along with other North American producers, tends to focus on pasture-based methods of farming.

Goat can be prepared in a variety of ways, such as being stewed, curried, baked, grilled, barbecued, minced, canned, fried, or made into sausage. Goat jerky is also another popular variety. In Okinawa (Japan), goat meat is served raw in thin slices as yagisashi. In India, the rice dish mutton biryani uses goat meat as a primary ingredient to produce a rich taste.

"Curry goat" is a common traditional Indo-Caribbean dish. Cabrito, a specialty especially common in Latin cuisines such as Mexican, Peruvian, Brazilian, and Argentine, is usually slow roasted. Southern Italian and Greek cuisines are also both known for serving roast goat in celebration of Easter; goat dishes are also an Easter staple in the alpine regions of central Europe, often braised (Bavaria) or breaded and fried (Tyrol). 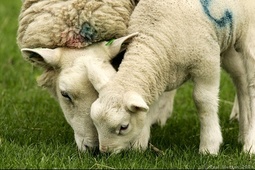 Sheep meat - and milk were one of the earliest staple proteins consumed by human civilization after the transition from hunting and gathering to agriculture. Sheep meat prepared for food is known as either mutton or lamb. "Mutton" is derived from the Old French moton, which was the word for sheep used by the Anglo-Norman rulers of much of the British Isles in the Middle Ages.

This became the name for sheep meat in English, while the Old English word sceap was kept for the live animal. Throughout modern history, "mutton" has been limited to the meat of mature sheep usually at least two years of age; "lamb" is used for that of immature sheep less than a year.

In the 21st century, the nations with the highest consumption of sheep meat are the Persian Gulf states, New Zealand, Australia, Greece, Uruguay, the United Kingdom and Ireland. These countries eat 14–40 lbs (3–18 kg) of sheep meat per capita, per annum.

Sheep meat is also popular in France, Africa (especially the Maghreb), the Caribbean, the rest of the Middle East, India, and parts of China. This often reflects a past history of sheep production.

In these countries in particular, dishes comprising alternative cuts and offal may be popular or traditional. Sheep testicles—called animelles or lamb fries—are considered a delicacy in many parts of the world. 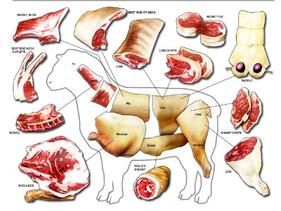 Perhaps the most unusual dish of sheep meat is the Scottish haggis, composed of various sheep innards cooked along with oatmeal and chopped onions inside its stomach. In comparison, countries such as the U.S. consume only a pound or less (under 0.5 kg), with Americans eating 50 pounds (22 kg) of pork and 65 pounds (29 kg) of beef.

In addition, such countries rarely eat mutton, and may favor the more expensive cuts of lamb: mostly lamb chops and leg of lamb.

Though sheep's milk may be drunk rarely in fresh form, today it is used predominantly in cheese and yogurt making. Sheep have only two teats, and produce a far smaller volume of milk than cows.

However, as sheep's milk contains far more fat, solids, and minerals than cow's milk, it is ideal for the cheese-making process. It also resists contamination during cooling better because of its much higher calcium content. Well-known cheeses made from sheep milk include the Feta of Bulgaria and Greece, Roquefort of France, Manchego from Spain, the Pecorino Romano (the Italian word for sheep is pecore) and Ricotta of Italy.

Yogurts, especially some forms of strained yogurt, may also be made from sheep milk. Many of these products are now often made with cow's milk, especially when produced outside their country of origin. Sheep milk contains 4.8% lactose, which may affect those who are intolerant.