Owners of dogs often enter the dog in competitions such as breed conformation shows or sports, including racing and sledding. 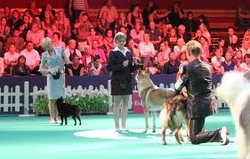 In conformation shows, also referred to as breed shows, a judge familiar with the specific dog breed evaluates individual purebred dogs for conformity with their established breed type as described in the breed standard. As the breed standard only deals with the externally observable qualities of the dog (such as appearance, movement, and temperament), separately tested qualities (such as ability or health) are not part of the judging in conformation shows.


A conformation doggie show is not a comparison of one dog to another but a comparison of each dog to a judge's mental image of the ideal breed type as outlined in the individual breed's breed standard. 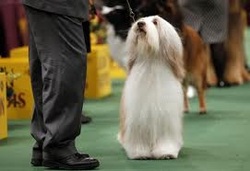 Dog show judges attempt to identify dogs who epitomize the published standards for each breed. This can be challenging, because some judgements must necessarily be subjective. As an example, what exactly entails a "full coat" or a "cheerful attitude", descriptions found in breed standards, can only be learned through experience with the breed that has that particular requirement.

Judges are generally certified to judge one or several breeds, usually in the same Group but a few "All-Breed" judges, have the training and experience to judge large numbers of breeds.


The first modern conformation dog show was held in Newcastle-upon-Tyne, England in June 1859, and the only breeds scheduled were pointers and setters.

Criticism of dog showing The practice of breeding dogs for conformation showing has become a subject of intense debate. Some critics state that conformation shows lead to selecting of breeding dogs based solely upon appearance, which is seen by some as being detrimental to working qualities and at worst as promotion of eugenics.  In the United States some working dog breed organizations, such as the American Border Collie Association and the Jack Russell Terrier Club of America, have put a considerable amount of effort in the fight to keep their breeds from being recognized by the AKC and some other kennel clubs, as they fear that introduction of their breeds to the show ring will lead to decreasing numbers of working dogs with adequate qualities.

In August 2008, BBC1 televised a documentary film titled Pedigree Dogs Exposed, which investigated the subject of health issues affecting pedigree dogs in the United Kingdom, with a particular emphasis on dogs bred for showing.

The programme provoked an unprecedented response from both the public and the dog-breeding community, with widespread criticism directed at the Kennel Club.

Since the broadcast, the BBC has withdrawn its television coverage of Crufts dog show in 2009, with other sponsors and partners also withdrawing their support, including Pedigree Petfoods, the RSPCA, PDSA and the Dog's Trust.

In response to the programme, the Kennel Club in the UK announced a review of all breed standards, with the long-term goal being to eradicate hereditary health concerns.

Most notably, they will impose a ban on breeding between dogs that are closely related and will impose greater monitoring to prevent unhealthy dogs from being entered for and winning awards at dog shows.

The World Dog Show is sponsored by the Fédération Cynologique Internationale for international championships in conformation and other dog sports. The location rotates between member countries.  Source 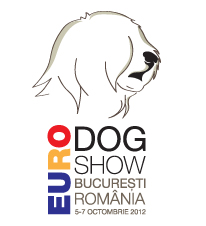 Romania (EU) is hosting the EURO Dog show 2012, many versed in how different countries deal with stray animals are in despair and angry and think this is hypocritical.

As Romania has serious problems with corruption and abandoned companion animals (stray dogs), the contrast on how they look at animals, is overwhelming.

Romania has about 2 million stray dogs and the government has not made ​​its own attempt to start neutering campaigns, but has left the responsibility and cost to associations and organizations through donations.


Stray dogs in Romania are living a very cruel life on the streets and not receiving any social assistance.

Dogs are starving, poisoned, hit by cars, trapped in horrible enclosures without food and care. ESDAW has for years tried to get comments from the Romanian Kennel Club in what way they help already born and abandoned dogs in Romania. We never got a personal answers. Now that this event is approaching, the Romanian Kennel Club had to make a statement, which reads: 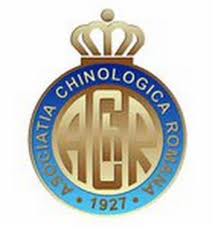 The Romanian Kennel Club (A.Ch.R.) has acknowledged the repeated outraging infringement of the Animal Protection Law by some local authorities in Romania, respectively the abusive and full of cruelty suppression of numberless stray dogs. As lovers and protectors of this wonderful animal:

The Dog, we find ourselves consternated by the brutal actions of those who should enforce, pursue and watch over the respecting of laws in our country and not undergo an outraging infringement!

All these irresponsible acts of cruelty lead to nothing else but to also attract in this field the opprobrium of national and international public opinion and to plunge Romania, as an image, to the outskirts of civilization.

As a non-profit organization engaged in pure-breed dogs we cannot remain  indifferent to these phenomena and we appeal to all competent organizations to take immediate action and replace this state of fact on its legal path.
During its whole existence, the Romanian Kennel Club has promoted love for the dog and has tried to guide its members into breeding dogs in the spirit of the desiderates stipulated by the Universal Declaration for Animal Rights, by the Animal Protection Law as well as by the norms of the international organization to which we are affiliated: the International Cynological Federation.

In the year to come, the Romanian Kennel Club will organize under the patronage of the International Cynological Federation, for the first time in Romania, the European Championship.

To this exhibition we expect over 12.000 dogs that will represent over 350 breeds from around the world. In this context, the Romanian Kennel Club has decided to launch on this occasion a fund raising action for the benefit of stray dogs.

Numerous people representing either international organizations for animal protection, either individual activists, simple citizens from the country or abroad, have raised their voices against the organizing in Bucharest, Romania, of this important exhibition, based on the irresponsible actions of some local authorities and the indifference of the central authority to this infringement of the law.

Without doubt, the Romanian Kennel Club stands by all who militate for solving this grave matter in a civilized way and with total respect for laws and European Union norms.

We wish that this European Championship to represent a time for promoting this wonderful animal: the Dog, the oldest and most devoted friend of man and in this way we wish to bring our contribution to raising sympathy and respect for animals, for nature in general.

ESDAW look forward to the fundraising action by The Romanian Kennel Club, for the benefit of stray dogs. We are almost convinced that all our wishes are that this money going to neutering program.

- Still, we can not help wondering why the Romanian Kennel Club failed to respond to our emails for years - but suddenly responded now ..... but we can guess why ..... hypocrite!

Cat Shows were born in Europe in 1871. Today, they are called traditional Cat Show witch is in opposition to the American system. A cat show is a judged event where the owners of cats compete to win titles in various cat registering organizations by entering their cats to be judged after a breed standard.

Both pedigreed and companion (or moggy) cats are admissible, although the rules differ from organization to organization.

Cats are compared to a breed standard, and the owners of those judged to be closest to it are awarded a prize. Often, at the end of the year, all of the points accrued at various shows are added up and additional national and regional titles are awarded.

Best of Breed winners at the Supreme Show do not get certificates but compete against the other BOB winners in their section for Best of Variety.

The seven Best of Variety Adults (Persian, Semi-Longhair, British, Foreign, Burmese, Oriental and Siamese) compete for Supreme Adult, the seven kittens for Supreme Kitten and the seven neuters for Supreme Neuter. The Supreme Adult and the Neuter can add the coveted word 'Supreme' to their title.

Finally, the Supreme Adult, Supreme Kitten and Supreme Neuter compete against each other for the honour of being judged Supreme Exhibit.

Non-pedigree cats are also permitted to enter the Supreme Cat Show. They also have to qualify for entry by having won an award at a previous show and compete to win the title of Supreme Non-pedigree Cat. Classes are also included for cross-breeds and 'Pedigree Pets'.

The Supreme Cat Show is held each November at the National Exhibition Centre, Birmigham, England.  Source