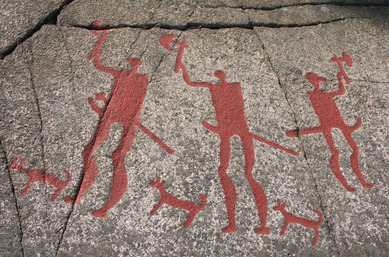 Stray dogs are domesticated dogs that lived with people at some point, usually as a companion dog. They have either been abandoned or accidentally released into urban areas, and now fend for themselves.  These dogs' offspring are also considered as strays, so the term "stray" may be applied to many generations removed from the original stray founder(s).

Experts in the area of free-ranging dog control sometimes distinguish between stray dogs and feral dogs. The former is used to refer to lost and abandoned pets or others that had been socialized to humans before taking to the free-ranging life, and the latter to those who have lived all their lives apart from people.

This distinction is important to them because stray dogs can be relatively easily taken into captivity, whereas feral dogs are more fearful and difficult to keep as pets, and so are more often captured, spayed or neutered, and released back into in the parks, vacant lots, and other hiding places on the margins of human society where they are most commonly found. Stray Animal  Control Practices (Europe)

It is man who created the dog for their needs, and then it is also we who are obliged to take care of all dogs.
The plight of strays is one of the most visible animal welfare issues in the world today.
Of the estimated 600 million dogs in the world (2012), approximately 75% are strays.

In many countries the majority of stray animals have been abandoned by their owners or are owned but allowed to roam freely - unneutered. European animal shelters are forced to kill millions of homeless cats and dogs annually.

All European countries have to neutering the animals, based on the WHO approach of catch, neuter and release programs.

For thousands of years, dogs have been shaped to be part of man's presence, therefore, becomes a domesticated dog never really wild, but cling always to man to seek closeness and appreciation.  Many people assume that abandoned animals like dogs and cats will survive in the free.
Contrary to popular belief, domestic animals do not automatically return to their "natural" instincts and cannot fend for themselves! These animals are not wild animals and has no natural place in the ecological system.

These animals are not created and equipped to fend for themselves. It takes six generations (48 years) for a stray dog to be as "wild" as it alone is able to hunt and find food in the same way as the wolf.

It is man who has bred so that these animals have become domestic animals. We must help these animals to regain the status as companion animal. These animals should be included as part of the social community and should not have to wander miserable outside care and consideration. The "stray" animals is a cruel phenomenon and should not exist.
Puppies born on the street living in hazardous conditions - many are subjected to deliberate cruelty while others have accidents or starving, freezing to death or getting sick or attacked by other dogs - many die.

Many European residents do not want these animals in their neighborhoods, where they both can act aggressively, spread disease and disrupt the night.

Stray Animals have no status as a companion and be seen more as a pest that can be treated badly.

They're unwanted animals, but from the beginning it was someone's companion. It is therefore important that all European countries face owner register and the requirement for identification (ID) is introduced to all companion animals.

There is always human error from the beginning that there are stray animals and it is our duty to help those animals who have no choice but are forced to live under these sad circumstances.

Laws need to be introduced to force countries and citizens to neuter the animals.

When the economy is getting tougher, it's the animals that suffer first - Interview with Vesna Jones, founder of the charity Greek Animal Rescue, talking about the plight of stray animals in Greece on the BBC World Service 9th December 2011.