Britains favourite wild bird has joined the ranks of the factory farmed animal machines. They have been forced out of the ponds and riversides and crammed in their thousands into dirty, stinking sheds their every natural instinct frustrated.


Force-feeding is banned in several countries, some of which were until recently producing foie gras. The few countries where it is still tolerated and practiced, and are increasingly isolated.

Many countries have not even found it necessary to pass a law explicitly banning the force-feeding: it is simply illegal under the laws that protect animals against abuse.

Countries of the European Union are subject to a directive on the protection of animals kept for farming, and a recommendation for the production of foie gras.

Under the directive, the force-feeding is illegal since it states that "no animal is fed and watered so that it results in unnecessary suffering or injury" (Article 14).


The recommendation prohibits the feeding wherever it is not already practiced (Article 24). In addition to European regulations, each EU country has its own legislation in this area, as well as some non-members.

A major outdoor clothing brand has been using down from force-fed geese to fill its quilted winter jackets, it has emerged.

The North Face, an American company whose outdoor clothing is worn by the likes of Barack Obama, Angelina Jolie, Sharon Stone and Elle Macpherson as well by numerous BBC reporters, has been found to use down from Hungarian geese farmed for foie gras  - The North Face European site.


Despite the company assuring customers in the past that the down used in their jackets would never come from a force-fed goose, animal rights campaigners found that the down came from Hungarian farms where geese are fattened using the force-feeding method to make foie gras from their bloated livers.

The technique used to artificially fatten the geese means that for three weeks, the birds have a metal funnel inserted into their throats down which grain is poured, far in excess of the quantity a goose would normally consume.

As a result, their livers swell. The resulting organ is harvested and sold to upmarket stores and restaurants. The sale of foie gras is banned from many UK supermarkets and department stores, all of whom cited animal welfare as the reason for dropping the product.

But while many North Face fans who buy the brand's quilted jackets would not dream of eating foie gras, they are unwittingly supporting the trade by wearing feathers acquired from farms who use the intense feeding method.

Previously the company, which reports annual sales in excess of £900m, had claimed in its literature that the feathers used in The North Face products were taken from 'the very best source - small family-owned farms in Hungary.'


A 2010 brochure issued by the firm stipulated its animal welfare standards - and specifically mentions that the brand would not use goose down from a supplier that force-fed geese. It said: 'We use only the finest grades of grey goose down from the very best

'At no time are the geese live-plucked for their down. Along with banning live-plucking, force feeding - for foie gras - has been banned in the supply chain of The North Face down material for many years.'

With a very different story emerging, many North Face buyers will undoubtedly be rethinking their position.

One, 33-year-old Jane Daley, said she would now feel uncomfortable wearing the down ski jacket she bought from The North Face last year. 'It has left an unpleasant taste in my mouth, there's no doubt about that. I am passionate about animal welfare and have never touched foie gras. To think I've been wearing a jacket filled with the down of a force-fed goose horrifies me.

'North Face should apologise immediately and let consumers know exactly how they plan to shift their supply chain - and they must do it as quickly as possible. They must be accountable and they must act fast - or risk losing customers.'

The North Face, which uses grey goose down in around 100 of its products, buys in the down from Californian company Allied Feather & Down.

The plight of the geese was discovered when outdoor clothing brand Patagonia, who also buys down from Allied, investigated the Hungarian suppliers at the behest of animal rights campaigners.


They found that the farms were employing force-feeding methods. Patagonia is currently exploring other suppliers, along with The North Face, but given that most geese farmers in Hungary produce foie gras, the challenge is not an easy one.

The North Face told the Telegraph: 'All of the down we are supplied by Allied Feather is a by-product of the food industry which, as the largest purchaser of goose product, drives the practice of force-feeding.

'We are working to identify alternative long-term sources of goose down that is not a by-product of force-feeding.' 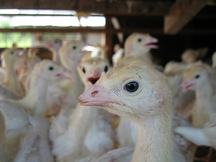 Turkeys - are traditionally eaten as the main course of Christmas feasts in much of the world (stuffed turkey) since appearing in England in the 16th century, as well as for Thanksgiving in the United States and Canada, though this tradition has its origins in modern times, rather than colonial as is often supposed.

Before the 20th century, pork ribs were the most common food on the holiday, as the animals were usually slaughtered in November. Turkeys were once so abundant in the wild that they were eaten throughout the year, the food considered commonplace, whereas pork ribs were rarely available outside of the Thanksgiving-New Year season.

While the tradition of turkey at Christmas spread throughout England in the 17th century, among the working classes it became common to serve goose, which remained the predominate roast until the Victorian era. While eating turkey was once mainly restricted to special occasions such as these, turkey is now eaten year-round and forms a regular part of many diets. 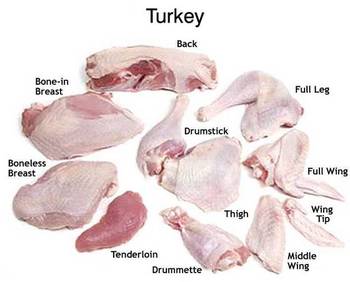 Turkeys are sold sliced and ground, as well as "whole" in a manner similar to chicken with the head, feet, and feathers removed. Frozen whole turkeys remain popular. Sliced turkey is frequently used as a sandwich meat or served as cold cuts; in some cases where recipes call for chicken it can be used as a substitute. Ground turkey is sold just as ground beef, and is frequently marketed as a healthy beef substitute.

Without careful preparation, cooked turkey is usually considered to end up less moist than other poultry meats such as chicken or duck. Leftovers from roast turkey are generally served as cold cuts on Boxing Day in Canada.

A large amount of turkey meat is processed. It can be smoked and as such is sometimes sold as turkey ham. Twisted helices of deep fried turkey meat, sold as "turkey twizzlers," came to prominence in the UK in 2004 when chef Jamie Oliver campaigned to have them and similar foods removed from school dinners.

Unlike chicken, duck, and quail eggs, turkey eggs are not commonly sold as food due to the high demand for whole turkeys and lower output of eggs as compared with other fowl. The value of a single turkey egg is estimated to be about US $3.50 on the open market, substantially more than a carton of one dozen chicken eggs. In the UK in 2009, 7,734,000 Turkeys were consumed on Christmas Day. (stat from Oak House). 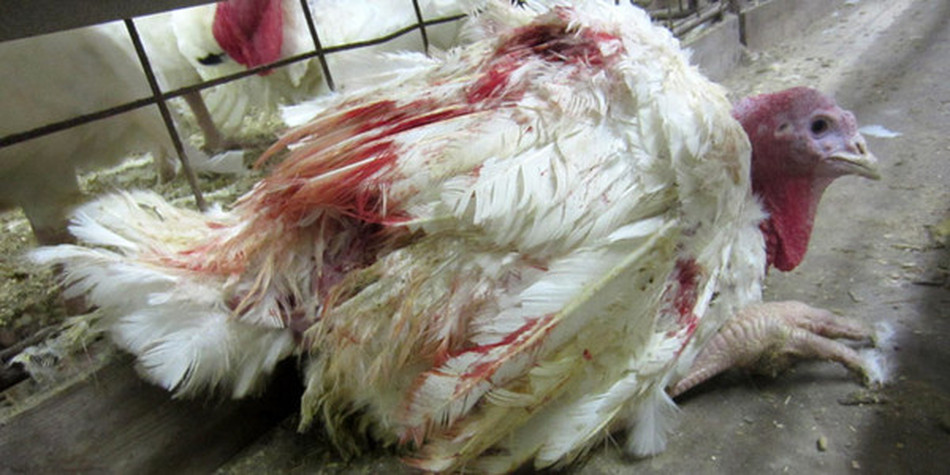