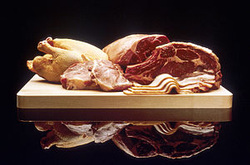 Meat is animal flesh that is used as food. Most often, this means the skeletal muscle and associated fat and other tissues, but it may also describe other edible tissues such as organs and offal. In commerce, meat is generally used by the meat packing industry in a more restrictive sense—the flesh of mammalian species (pigs, cattle, lambs, etc.) raised and prepared for human consumption, to the exclusion of fish, poultry, and other animals.

Usage varies worldwide by culture, and some countries such as India have large populations that avoid the consumption of all or most kinds of meat.

Game or bush meat is also generally distinguished from that produced by agriculture. The consumption of meat has various traditions and rituals associated with it in different cultures such as kosher and halal and its production is generally regulated by state authorities as well. This article is mainly focused on that process from primary production to consumption.

The word meat comes from the Old English word mete, which referred to food in general. The term is related to mad in Danish, mat in Swedish and Norwegian, and matur in Icelandic, which also mean 'food'. The word "mete" also exists in Old Frisian (and to a lesser extent, modern West Frisian) to denote important food, differentiating it from "swiets" (sweets) and "dierfied" (animal feed).

One definition that refers to meat as not including fish developed over the past few hundred years and has religious influences. The distinction between fish and "meat" is codified by the Jewish dietary law of kashrut, regarding the mixing of milk and meat, which does not forbid the mixing of milk and fish. Modern Jewish legal practice (halakha) on kashrut classifies the flesh of both mammals and birds as "meat"; fish are considered to be parve, neither meat nor a dairy food.

The Catholic dietary restriction on "meat" on Fridays also does not apply to the cooking and eating of fish.
The Latin word carō "meat" (also the root of 'carnal', referring to the 'pleasures of the flesh') is often a euphemism for sexual pleasure, effected from the function performed by fleshy organs. Thus 'meat' may refer to the human body in a sensual, or sexual, connotation. A meat market, in addition to simply denoting a market where meat is sold, also refers to a place or situation where humans are treated or viewed as commodities, especially a place known as one where a sexual partner may be found.

"Meat" may also be used to refer to humans humorously or indifferently . In military slang, "meat shield" refers to soldiers sent towards an enemy to draw fire away from another unit.

Meat producers may seek to improve the fertility of female animals through the administration of gonadotrophic or ovulation-inducing hormones. In pig production, sow infertility is a common problem, possibly due to excessive fatness.

No methods currently exist to augment the fertility of male animals. Artificial insemination is now routinely used to produce animals of the best possible genetic quality, and the efficiency of this method is improved through the administration of hormones that synchronize the ovulation cycles within groups of females.

Growth hormones, particularly anabolic agents such as steroids, are used in some countries to accelerate muscle growth in animals.

This practice has given rise to the beef hormone controversy, an international trade dispute. It may also decrease the tenderness of meat, although research on this is inconclusive, and have other effects on the composition of the muscle flesh. Where castration is used to improve control over male animals, its side effects are also counteracted by the administration of hormones.

Sedatives may be administered to animals to counteract stress factors and increase weight gain. The feeding of antibiotics to certain animals has been shown to improve growth rates also. This practice is particularly prevalent in the USA, but has been banned in the EU, partly because it causes antibiotic resistance in pathogenic microorganisms.

livestock
Farm to Fridge - Meet you meat
U.K - The distressed animals were secretly filmed at a Norfolk farm signed up to the Freedom Food scheme -- backed by the RSPCA -- which is meant to ­guarantee high animal welfare standards.